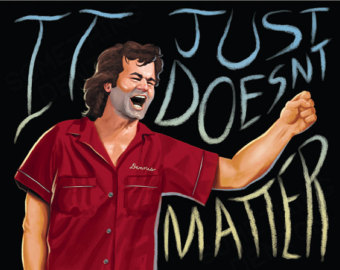 When in doubt about anything, listen to Bill Murray

It’s okay, Colts fans.  Breathe in, breathe out.  As we’ve learned over the past decade, August losses just don’t matter.

For a team that lashed itself to the hull of the USS Super Bowl L or Bust, the Colts have been fundamentally flawed at best in all phases through losses against the Philadelphia Eagles and Chicago Bears.  But it just doesn’t matter.

Missed tackles or blocks have marred virtually every play, and fans are starting to wonder whether the Colts are capable of winning the AFC South again, much less the Super Bowl.  But it just doesn’t matter.

Before you believe that nothing good has happened during the preseason, cast a glance at the highlights of the Packers vs. Steelers game from yesterday.  Packers wide receiver Jordy Nelson likely tore his ACL, and Steelers center Maurice Pouncey will have ankle surgery after Ha Ha Clinton Dix rolled up on his leg in the first quarter.

The best result in the NFL preseason is health not wins, and the Colts have suffered only small dings halfway through this seemingly endless preseason.  Last year, not only did the Colts lose all four of its preseason games, the regular season began with two losses.  Still, they found a way to finish 11-5 for the third straight season, and move forward another step in the playoffs to the AFC Championship.

The Colts will be just fine despite Jack Mewhort learning on the job at right tackle, despite back-up quarterback Matt Hasselbeck suddenly looking as old as he is, and despite serious questions about the Colts defensive front being able to stop the run.

If you looked closely, you saw a few bright spots.  David Parry looks like a serious-minded, detail-oriented nose tackle who focuses every play.  Frank Gore looked like Frank Gore on his two carries.  T.Y. Hilton backed up a drop with a big catch (that’s looking at the cup half full).  And Trent Cole appeared ready to contribute with some explosiveness.

Winning games in August means nothing in January.  Outstanding execution while losing would be a solid consolation in the preseason, but excellent health will have to suffice.

Sure, there are questions.  Watching the right side of the offensive line try to pass protect does not inspire anything resembling confidence, but given the consistent success of the last three seasons, wisdom dictates patience.

Reports of Reggie Wayne taking a physical with the New England Patriots have Colts fans ready to march of the Colts offices on West 56th Street with torches, but they would be wise to remember the misery all football fans felt as they watched Wayne hobble through defensive backfields unable to create separation at the end of the 2014 season.

Wayne got old last season, and when football players get old, there is no turning back the clock.  It happens to all football players and they unfailingly recognize it themselves – just as Wayne did during a game at MetLife Stadium against the Giants.  He reportedly sat at his locker after the game near tears with his jersey and pads on long after teammates had showered.

Through the rest of the season, Wayne tried to compete but couldn’t.  And now, Wayne has succumbed to a condition common with football players – a compulsion to prove to himself that he is not athletically irrelevant.

The Patriots might try to milk the last drop of football Wayne has in him.  Sadly, we saw that utter run dry last year.

Odd that both the first and last guy to know a player is done is the player himself.