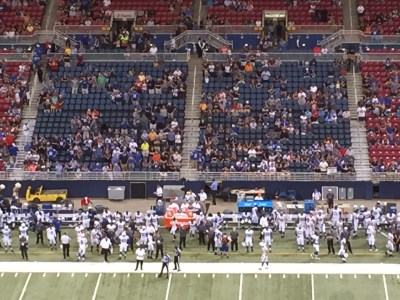 This is what the crowd looked like – not an hour before the game – but during the first half as interest was at its peak.

NFL fans in St. Louis have no team.

For the past decade, the Rams have been terrible, but even a historic level of poor play can’t get a franchise de-listed.

No, St. Louis fans have turned their backs on the Rams because owner Stan Kroenke is in the midst of very publicly trying to move the team to Los Angeles.

Saturday night, the Rams hosted the Indianapolis Colts in what many believe is the only fan-friendly preseason game in front of a friends and family crowd at the Edward Jones Dome – many of whom made the drive from Indy to watch the Colts.

The announced ticket distribution was 37,000, but nowhere near that made it into one of the building.

I didn’t know it had gotten that bad.  After leaving St. Louis in 2013, I knew there was a disconnect between the owner and the city, but I thought the misery would have ended one way or another by now.

The relentless losing combined with the relentless rumors of the Rams relocating to Los Angeles have driven an already weak fanbase away from a team that 15 years ago turned America’s best baseball town into a pro football hotbed.

Fans and media say the same thing – that Rams owner Stan Kroenke is a carpet bagger who has abandoned the city.  They say, regardless of whether a team remains in St. Louis, it won’t be owned by Kroenke.  And if it is, they won’t support it.

Maybe the Rams move and are replaced by another team.  Maybe the name “Rams” is attached to an expansion franchise in LA and the current players and front office sticks in St. Louis under another name.  Maybe an existing team relocates to a new stadium built north of the current home.

Only two things are certain – fans are done with Kroenke and anything with his taint on it, and the Jones Dome will be replaced if another NFL tenant can be found.

The interim for the Rams will be an exercise in futility.  With a nearly empty stadium on a night where fan interest should be at a fever pitch (Lucas Oil Stadium was full and loud for the Colts preseason home opener), a product that has brought nothing but disappointment for a decade, and an owner intent on moving, this promises to be a gloomy divorce between a team and city that seemed so happy when Kurt Warner, Marshall Faulk, Isaac Bruce, and Torry Holt brought the Greatest Show on Turf to an adoring city.

I only spent two years in St. Louis, but I travelled with the Rams to road games, got to know a lot of people in the front office, and hate to see them inside the eye of this stormy malaise.  It’s not their fault, and no amount of hard hard can repair the fracture caused by their billionaire boss.

For the media in St. Louis, this is a nightmare.  Indifference is the enemy of ratings and page views, and you would have to search long and hard to find a better example of indifference in a fan base than what was on display Saturday night.  The biggest cheer of the night might have come when a fan guessed under which helmet a football was hidden during a video shell game timeout filler (it was #2 for those scoring at home).

It was awful.  It was sad.  And even as someone who not long ago attended these games as part of his job, it was shocking.

St. Louis fans deserve better, but so do the Rams, despite Kroenke the carpet bagger doing everything but hiring movers and driving the trucks himself from Earth City (where the Rams facilities are located) to Los Angeles.

It seems financing for a new stadium in St. Louis is likely to be in place to break ground in time for an opening in 2019, but in a city filled with bridges across America’s longest river, the ties that used to bind this city and its current NFL team has been blown to hell.

This purgatory will end soon enough, but it’s going to be miserable at the minimum for everyone involved.

There will be no winners – other than Kroenke whose team’s value is likely to go from the bottom of the NFL barrel to among the very top.

12 thoughts on “Colts win in St. Louis, but real losers are Rams fans who feel abandoned”