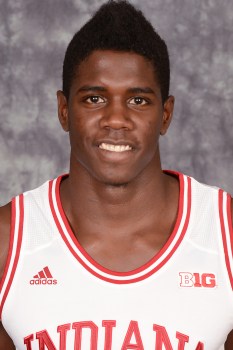 If I’m an Indiana basketball player, I’m steering clear of this guy. As easy as he is to recognize, he must be that hard for former teammates to avoid.

“On this week’s episode of Ain’t no Party like a Hoosier Party, the boys welcome an old friend back to the show for a night of revelry that begins with laughter, but ends with another hilarious headache for Coach Crean!”

That’s the promo for what should be a reality based sitcom that couldn’t be odder if it came from the imagination of writers – the really clever ones, not those who churn dreck like Two Broke Girls.

No joke – Hanner Mosquera Perea was in the car with Emmitt Holt and Thomas Bryant the early morning they were cited for illegal possession of alcohol, a charge that resulted in Holt being dismissed from the team in the same way Mosquera Perea was a few months ago.

He can throw kids off the team, but Tom Crean can’t post sentries on State Roads 37 and 46 to keep out former transgressors.

If this was a sitcom, it would be funny, but it isn’t a sitcom, and now because Mosquera Perea rallied the troops for another Bloomington party, yet another kid is packing his bags for an outpost that is decidedly not Indiana-esque.

Mosquera Perea and former Hoosier Peter Jurkin have both accepted offers to continue their education and basketball careers at East Tennessee State.  Where Holt will wind up is anyone’s guess – maybe ETSU like his buddy.

Meanwhile, Crean looks at least a little bit sympathetic for the first time in this unraveling debacle as his options for disciplining a former player are decidedly limited.  Maybe he could threaten Mosquera Perea with bodily harm, “Hanner, I hear word you are back in Bloomington again, and you’re gonna have a tough time playing basketball with two cracked kneecaps!”  That isn’t Crean’s style – nor should it be anyone’s – as much as he might want to go gangland on the young disruptor.

Let’s not forget about Juwan Morgan, another freshman who was in the car as citations were issued to fellow freshman Thomas Bryant and Holt, according to an excise police spokesman.  Maybe he went along for the ride because he was bored.  Maybe he was ready to drink a copious amount of vodka too.  It’s not up to fans to guess as to his motive, so he is the barely credited and forgettable guest star without any lines in this farce.

More important for the current Hoosiers is the reality that trouble follows some guys, and it sure seems like Mosquera Perea is one of them.  Avoiding those guys can be the most important lesson learned in college, and while it would be idiotic and inappropriate for Crean to threaten Mosquera Perea should he pay another social call on his former teammates, a team leader or two might want to have that kind of conversation with him themselves.  The responsibility for dissuading idiocy doesn’t belong to Crean alone.

Leaders not only know how to avoid trouble themselves, they can help others avoid it too.  Sometimes that means strongly discouraging the threat.

Is any player strong enough to tell Mosquera Perea that his new home is in Johnson City, Tennessee, and not Bloomington?  Nice cliff hanger!

Maybe we’ll find out next week.

9 thoughts on “Indiana Basketball – Hanner Mosquera-Perea was in the car with Holt and Bryant! Is this a sitcom?”