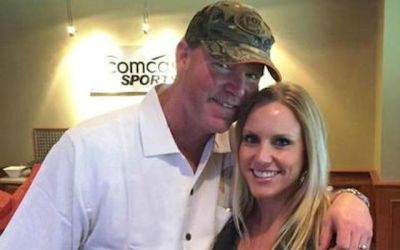 Redskins GM Scot McClaughan and wife Jessica have likely had some tense conversations about social media this week.

There is nothing to feat about social media unless you have some serious darkness in your heart, or a faulty filter either through personality quirk or a propensity for entertaining yourself after a couple of cocktails.

Scot McCloughan is the new general manager of the Washington Redskins, and his wife Jessica took to Twitter August 30th to question the journalistic methodology and information acquisition strategies of ESPN reporter Dianna Russini, “@diannaESPN Please tell us how many BJ’S you had to give to get this story. And did they laugh at you before or after?”

The Redskins PR department responded to the story by claiming this was a fake account, but a little rudimentary checking by blacksportsonline.com showed it was indeed Jessica’s account, which has since been deactivated.

You don’t need a journalism degree to hop on Twitter to spread half-truths, no-truths, and mean-spirited invective, and that’s a good thing most of the time.  Social media removes the middle man and exposes the character of the author to everyone paying attention.

We need to know who we are dealing with, and Twitter draws a straight line between what should have remained private thoughts and those who pay attention to their feeds.

McCloughan is clearly troubled by something in Russini’s behavior, and tweeted a nasty accusation that could easily draw a libel lawsuit if untrue.  She is now dealing with the consequences of her own dark and very public ponderings.

An nonsensical apology has been released by the Redskins in Jessica’s name, “I deeply apologize for the disparaging remarks about an ESPN reporter on my personal Twitter account. The comment was unfounded and inappropriate, and I have the utmost respect for both the reporter and ESPN. I regret that my actions have brought undeserved negative attention to the Redskins organization and its leadership. My comments in no way reflect the opinions or attitudes of the organization and I regret that my behavior has in any way negatively impacted the team and its loyal fan base.”

I’m going to go out on a limb and guess that the same woman who tweeted about an oral sex for stories swap being perpetrated by Russini does not feel “utmost respect” for anything she does, but why quibble about an awkward attempt to put the toothpaste back in the tube?

Social media can be a third rail that destroys a career, or a wonderful tool of enlightenment and positive branding.  The results depend upon the intent and execution being just a little more gracious and genteel than McCloughan displayed.

The moral of the story is tweeting angry, drunk, or otherwise from a place of emotional disturbance is a terrible idea.  Just as radio hosts can’t indulge in blathering on and on as though they are truly alone in a room, emotions should not be laid raw in social media posts – unless the results aren’t a concern, which is always our hope because these stories are routinely hilarious.

The best advice in the use of social media is to present yourself not as you truly are, but as you would like to be perceived.  Thank God people like McCloughan ignore that advice and lay naked their pungent meanness for all to see.