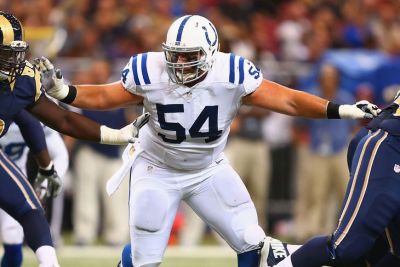 While the Colts can only go as far as Andrew Luck takes them, the play of nose tackle David Parry and the defense will be just as important.

Doesn’t do much good to focus on getting in shape for a season you won’t play.

Some members of the Colts seemed to feel their roster spots were guaranteed, and making plays in the preseason was beneath them.  Others hustled, hit, and earned a job at the expense of those who were dumped.

Defensive lineman Montori Hughes and Josh Chapman are gone.  Henry Anderson and David Parry took their positions.  Running back Tyler Varga and safety Winston Guy made the team through their desire and ability to make plays.

Somehow, Bjoern Werner remains on the roster.  Not that he doesn’t try, but the results of his first two seasons plus one very mediocre preseason suggest that his roster spot might be better invested in someone else.

The Colts are assumed to have won the AFC South before the season even starts because Andrew Luck is their quarterback.  Add Frank Gore, Andre Johnson, T.Y. Hilton, Coby Fleener, Dwayne Allen, Donte Moncrief, and Phillip Dorsett, and the feeling is the only team that can stop the Colts might be the Colts.

All the defense needs to do is stop the opposing offense one more time than their counterparts stop the Colts, and math would suggest the Colts will win every game.

There are plenty of questions about the Colts – can the offensive line stop basic fronts from getting to Luck?  What schemes will help the Colts hide D’Qwell Jackson’s inability to cover tight ends or backs?  Is rookie Josh Robinson ready to be the Colts change of pace back?  Can Parry make plays in the middle of the Colts defensive line?  Is Robert Mathis the 2013 wrecking machine version of himself, or an old and broken former great?

We are five days from the Buffalo Bills helping the Colts answer those questions.

After three straight 11-5 seasons and trips one step further every postseason under GM Ryan Grigson and coach Chuck Pagano, expectations are that the Colts will find their way to that final step.

Even if the joint media availability yesterday with Grigson and Pagano was a disingenuous effort to quell rumors about a serious rift between the two, executives don’t need to like each other to succeed.  They just need to pull on the same end of the rope.

Looking up and down the roster, it’s not easy to see the Colts in the Super Bowl until you find #12.  The biggest question facing the Colts is whether mediocrity on the defensive side of the ball can be overcome by a potentially great quarterback and dynamic weapons at his disposal?

Much like the Colts of the previous 15 years, the Colts will go as far as their quarterback takes them.  But if memory serves, the Colts could only go so far with Manning unless the defense had a game wrecker like Booger McFarland, Corey Simon, or others.

The list of NFL teams that has tried and failed to win a championship by stacking the offensive deck is long and bleak, while championship teams with great players across the defense is long and illustrious.

In five months, we will know whether the Colts have been successful in building an offense so mindbogglingly explosive it can win despite defensive mediocrity.

The ride starts Sunday in Buffalo.  It should be a very entertaining trip.