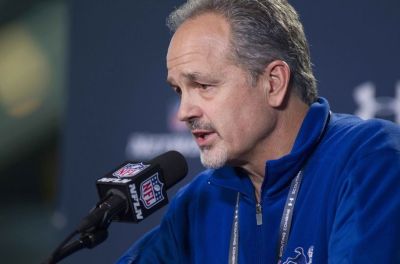 Whatever Chuck Pagano is saying here, I’ll bet he uses the word “grit”. As a cancer survivor, he’s embodied the word, and has earned the right to trot it out often.

The Indianapolis Colts were expected to be faced with a lot of adversity this week.

Pick your poison for reasons Colts fans indulged in a little pessimism heading into the Thursday Night Football at Reliant Stadium in Houston.

Those negative thoughts were kept outside the Colts family, and the result was a 27-20 win that brought the Colts a 16th straight AFC South victory (including its last three games), netted Hasselbeck an outstanding QBR of 92.1 (out of a possible 100), allowed Luck another 10 days to rehab his right shoulder, re-established Johnson as a legit weapon, and kept the vaunted Texans pass rush from sacking the Colts QB a single time.

The Colts weren’t perfect, but they were better than the Texans, and that’s all that really matters.  The completed hail mary to end the first half was ridiculous, and the other myriad blown coverages by the Colts secondary might have proven fatal against a more talented opponent.

Pagano uses the word “grit” as though the Colts have a special license to embody it, but this team that was so close to crapping the bed against Tennessee and Jacksonville during the last two Sundays was led by a 40-year old quarterback who actually crapped the bed during this short week.  That seems gritty.

Hasselbeck isn’t going to thrill fans with his wheels or laser-rocket arm, but he can avoid making the play that will lose you the game, and often not the avoidance of what’s necessary to lose brings a victory.

He manages a game as well as anyone, and last night he certainly shone brighter than his counterparts with the Texans, who were good until they weren’t.

One bad play can kill a team’s chances, and despite Texans quarterback Brian Hoyer’s earlier solid work, his late interception was a fatal blow to the hopes the Texans harbored at the two-minute warning.

Because the Colts offensive line gelled at the right time, Hasselbeck was able to force-feed fluids and manage his discomfort, safety Mike Adams snared two wayward throws for picks, and D’Qwell Jackson posted another double digit tackle game, the Colts may end this weekend with a commanding two-game lead in the AFC South with wins against each of their division rivals.

Tough games are ahead for the Colts, including a week six exam against the undefeated New England Patriots who have eaten the Colts for breakfast, lunch, and dinner every game the two teams have played this decade.

The four games the Pagano/Grigson regime has matched up with Bill Belichick’s Patriots, the aggregate point differential has been 116 points (29 points per game), and none have been decided by less than 20 points.

That means the Colts will face another week of “experts” bashing them – saying they have no chance to win or even compete against the cheating wretches from the northeast.  There will be another week of the media asking a torrent of questions about Luck’s shoulder, followed by Pagano vague platitudes.  Day after day assertions will be advanced that the Colts can beat the AFC South, but when playoff caliber teams challenge them, they wilt.

Pagano’s Colts have been there, done that.  They will answer with, you guessed it, an assertion of grit.

2 thoughts on “Indianapolis Colts – Reports of the Colts demise greatly exaggerated; they shove it to experts with “gritty” 27-20 win”