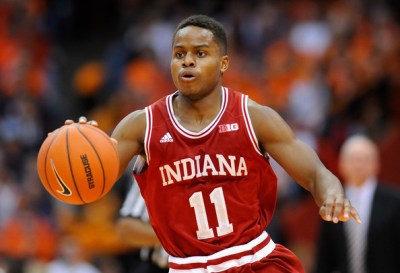 Yogi Ferrell returns for his fourth season at Indiana – whether they can meet expectations this year depends in part on Yogi’s defense.

Tonight, the journey begins for the Indiana Hoosiers.  A deep and talented backcourt coupled with a refurbished group of bigs have fans in Bloomington excited about basketball again this year – just like last year and the year before that.

The names have changed, but the salesmanship is the same.  Hope is the currency of the mediocre, and the Indiana Hoosiers have been thoroughly mediocre for the past two seasons.  A lack of leadership among the players and coaching staff has left stalwart Indiana fans disappointed, but willing to embrace another set of opportunities this season for a group of young men they admire because the wear the candy stripes.

Tom Crean is said to be more calm and centered – confident that changes to the standards of behavior he enforces will bring much-needed improvement on and off the court.

Eastern Illinois visits Assembly Hall tonight in the regular season opener – a game available only behind a pay wall on the Big Ten Conference’s website, which is a shame.  Cable and satellite subscribers already pay a monthly fee for the Big Ten Network, and most only watch for live broadcasts of their local university’s football and men’s basketball games.  Now, the conference is gouging consumers for $9.95 to watch this game.  Thanks, Jim Delany!

That’s anger to be purged in a different list.

This list brings you the top five reasons for ratcheting back optimism about Indiana University Basketball:

1 – IU is again using the media to perpetuate blather about how the program and Tom Crean have changed.  A story in the Indianapolis Star last Sunday painted Crean as a coach who works tirelessly to overcome hurdles stacked between him and success by demanding fans and the irresponsibility of his players.  Oh sure, every night Crean’s head hits the pillow, he can look back on a day where adversity was overcome, secure that he has done everything possible to give the players and staff a valuable piece of his soul.  What a wonderful man – so ready to sacrifice self for the benefit of others.  When IU turns to the media to shape the Crean narrative, nerves over the season show.

2 – A bad defensive backcourt returns intact.  Yogi Ferrell is a wonderful offensive basketball player, but a worse defensive point guard is hard to find.  James Blackmon is a special scorer, but stopping dribble penetration is an art he has not mastered – or acknowledged.  Nick Zeisloft is a great shooter, but quite fond of closing on shooters with both hands down.  Maybe Ferrell, Blackmon, and Zeisloft become great defenders in 2015-2016, but I’ll wait until I see it to believe it.

3 – Thomas Bryant = Noah Vonleh.  Of course, Vonleh and Bryant are different players – both in build and attitude – but the comments from people inside and outside the program about the impact Bryant will have on the Hoosiers are very reminiscent of those gleefully yelped two years ago about Vonleh.  The Vonleh team went 17-15 overall and 7-11 in the Big Ten despite Vonleh averaging 11 and nine.

4 – Tom Crean is Tom Crean.  This is Crean’s eighth Indiana team, and the program is what the program is – winners of 17-to-22 games, firmly ensconced in the middle of the Big Ten.  This is IU under Crean.  We can quibble over style, tics, recruiting geography, and dozens of other subjective metrics, but we can’t argue wins and losses.  Forgiving the first two seasons (we could also argue whether that is righteous – I think it is), Indiana is 105-65 overall and 44-46 in the Big Ten.  That includes a conference record of 16-20 in the last two years.

5 – Fans refuse to demand more success.  An acceptance of mediocrity and blind hope for better days ahead have allowed Indiana to continue to monetize the program at a high level.  With the behavioral issues at IU, many called for consequences that would get the attention of Crean’s players.  The same dynamic might be employed by fans who would like Indiana to be the elite college basketball program many insist it is despite results that argue the contrary.

Indiana University was my home for nearly six years, and I will always hope that IU finds a way to be successful.  I know how hard the players work to improve, and would love to see them play well enough and compete hard enough to win a championship this season.  I will always root for IU, but with season after season of failing to meet expectations, maybe it’s time to adjust those expectations and admit exactly what Hoosier Basketball has become – a run of the mill Big Ten program with only one elite attribute; the fan base.