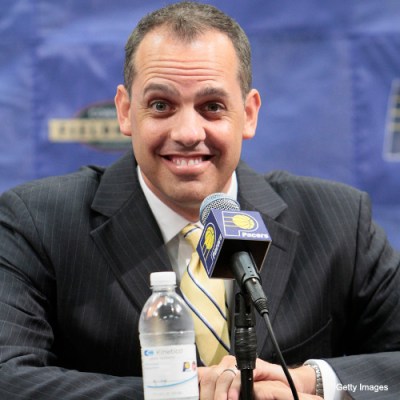 Pacers coach Frank Vogel has at least 10 reasons to flash that goofy smile as the Pacers have improved more quickly than expected.

Ten games into the season, the Pacers are 6-4.  Projected over the entire season, that equates to 48-49 wins.

The Pacers play the Chicago Bulls on the road tonight in what will be an early referendum on their progress in reconfiguring their roster and offensive concepts.

It’s way too early to print playoff tickets, but the Pacers are an NBA surprise so far.  Health can crumble in a moment, and we saw chemistry dissolve two years ago when the Pacers appeared to be juggernauts headed for an NBA title, so we need to temper our enthusiasm.  But to this point, the Pacers appear to be a legit contender for a top four seed in the East.

There are plenty of reasons to enjoy watching the Pacers as they have won six of their last seven.  Here are my top ten.

1 – Paul George has adapted very quickly to his new role, which is very similar to his old role.  He has scored between 26 and 36 points in each of the last six games.  His consistency has been a huge asset for the Pacers.

3 – Ian Mahinmi seems to have improved around the basket.  His ludicrous free throw percentage (22.2%) aside, Mahinmi has become a guy that Pacers can enter the post to and get buckets.  It doesn’t happen often, but if Mahinmi can score 10-12 points down low, it keeps defenses honest.

4 – Defense has improved more than the offense.  Despite all the hubbub about the decision to go more uptempo with the offense, and the expected decline defensively, the defense is ahead of the offense 10 games into the season.  The Pacers defensive rating (how many points are expected to be scored in 100 possessions) has improved year to year from 103.2 to 100.8.  The offensive rating has dipped to 101.2 from 103.5 – but somehow they are more fun to watch.

5 – David West and Roy Hibbert are goners.  There is nothing more obvious and unpleasant than watching a guy run out the clock on his team, and it was clear last season that West and Hibbert wanted no part of playing for the Pacers.  They are gone, and the mood on the floor has improved through those subtractions.

6 – Jordan Hill has become a business-first player.  There are a lot of positives to George Hill’s contributions to the Pacers, but the greatest might be the tone he sets.  The Pacers go about their business in a sober and focused manner, and those who don’t (hello, Lance Stephenson), don’t stick around in Indy.  Hill has quickly evolved from a guy from seemed to meander mentally to a player paying attention from possession to possession.  Or, I just see it that way because now the Pacers are winning, and I’m not looking for someone to blame for a loss.

7 – Offensive selflessness leads to cohesion.  This might again be the success of the last seven games talking, but the Pacers don’t force a lot of shots.  The extra pass is made more often than not, and while George is the only gifted scorer on the team, the rest of the Pacers are knocking down open shots as they should.

8 – Myles Turner appears as good as advertised.  Despite the chipped thumb that is expected to keep Turner on the shelf for a month, it’s obvious that Turner is a rare talent.  His combination of length and ability to step out and shoot is rare, and he appears to be focused on all the right stuff.  He looks like a 2019 All-Star.

9 – Tickets are plentiful.  That means there is plenty of room on this bandwagon, and you won’t have to overpay for the experience of being a witness to this group coming together and winning.  Rarely has a team been able to pivot rosters and strategy this sharply without sinking into an abyss of mediocrity or worse.

10 – Not enjoying the Pacers makes the winter too damn long.  When the Pacers suck and Indiana is mediocre, the wait to opening day at the Indianapolis Motor Speedway is interminable.  It seems the Pacers will be a playoff contender – and maybe better – so the winter will fly by with fun basketball to watch regardless of the challenges experienced by the Hoosiers.