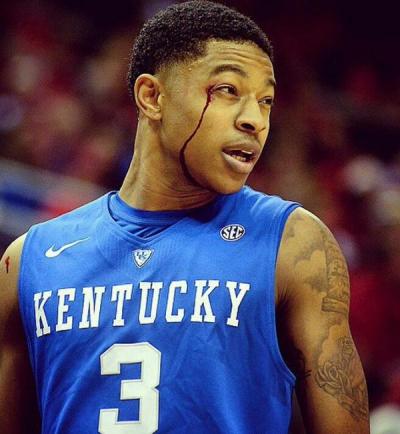 Whatever you believe about Kentucky coach John Calipari, you cannot be a college basketball fan and not enjoy watching Tyler Ulis play defense.

The college basketball season started with a vengeance yesterday, and fans got a great look at big time programs paying against each other instead of preparing for conference games by tuning up Lipscomb, Austin Peay, and directional state universities.  It was great.  Loved every minute.

While we love college hoops, pointing out some common misconceptions seems a reasonable investment of time and energy.

Here are the top seven myths of college basketball that deserve to be debunked:

The Big 12 is a part of the Power Five.  In truth, they are closer to the middle tier of conferences than in joining the Big Ten, Pac-12, SEC, and ACC in both football and basketball.  Sure, Oklahoma is representing the Big 12 very nicely in both major sports, and Kansas is always highly ranked and wins the conference in hoops every season, but two Final Fours in the last decade reveals their elite-minus status.

Indiana is an elite college basketball program.  The Hoosiers, while still beloved in its home state, has been to one Elite Eight in more than 20 seasons and has won the Big Ten one solitary time in that same period.  The candy stripes might be iconic, but the level of basketball has been ordinary.  Indiana has been recently passed by Butler and Purdue in national relevance if not local passion.

Mike Krzyzewski is a benevolent father figure to a group of wonderful young men committed to earning a degree.  Hey, Coach K isn’t some hoops pirate scouring the high seas for booty in the form of tall, freakishly athletic basketball players, but he hasn’t won more games than anyone else through being a Father Flanagan type.  No one craves wins more, and while he is perceived as a guy who stays above the fray in his recruiting tactics, the brand and man are not mirror images.

Kentucky wins solely through the acquisition of special talent by any means necessary.  While I have my suspicions about Kentucky’s tactics in assembling a talented roster – suspicions I believe to be well-founded – to deny yourself the enjoyment of watching a player like Tyler Ulis defend is just silly.  Sure, John Calipari is all about building the Cal brand, but that taint shouldn’t prompt a boycott of Ulis and his teammates.

Summer basketball is what’s wrong with college hoops.  It can be infuriating to watch some AAU teams play.  The coaching can be horrid (I’ve seen coaches spend entire games on their smart phones), but for some programs, summer tournaments are well-run and well-coached.  Players can learn how to play, and the tournaments give coaches an opportunity to evaluate recruits in bulk.  It’s a flawed system that allows bad actors to exploit kids, but it can a force for good where friends are made, and basketball is learned.

Coaches are worth what they are paid.  It’s a human tragedy that professors are very fortunate to earn $100,000 per year while basketball coaches can be paid millions while seeing education as a necessary inconvenience.  This is true for college football too, where many assistant coaches earn more than one-million dollars.  When coaches who don’t teach are paid more than teachers that don’t coach, our twisted priorities are revealed.

Dick Vitale is a pox on the game.  There are those who hear Dickie V use his ESPN pulpit to extoll the virtues of his coaching cronies and wince.  His catch phrases are moldy relics of a simpler time when fans had few choices but to watch the games to which Vitale was assigned.  The fact is that Vitale shows up with energy and a palpable love for what he does, and for me that’s enough.  A cherry on top of that bald dome is that Vitale works hard to raise money for worthy charities.  Sure, his analysis is elementary if not irrelevant, but do you really need it anyway.  A 12-year old watching Kentucky play Duke understood Marshall Plume couldn’t defend any attack the Wildcats threw his way.