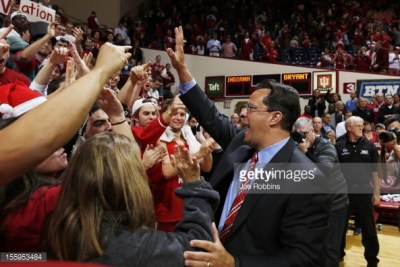 Seems like a long time since Tom Crean and IU fans celebrated together. Maybe there are a few reasons for optimism.

Okay, I admit it.  This is just an intellectual exercise to see if I can come up with 10 reasons for optimism about IU Basketball without getting snarky.  Last night’s loss at Duke was miserable.  The defense was pathetic, and it was one of those 20-point losses that felt much worse.

But like Tom Crean said after the game, “It’s December 3rd!”  If Indiana fans can’t find reasons to look forward to watching the Hoosiers, it’s going to be a long winter (unless they are willing to watch Butler or Purdue, who both appear capable of playing at a very high level).

1 – Indiana is still tied atop the Big Ten with a 0-0 record.  There is a lot that can happen for and to a basketball team in the four weeks that will pass before IU plays its first non conference game at the end of the month.

2 – The Big Ten might be down this year.  Minus Michigan State, Maryland, and Purdue, nobody looks great.  Illinois almost lost to Chicago State.  Wisconsin did lose to Western Illinois.  Rutgers lost to St. John’s.  Penn State has lost to both Duquesne and Radford.  There are Big Ten wins to be had, and if IU can get to nine, they are likely going to the NCAA Tourney.

3 – Collin Hartman is competing hard.  He’s a solid component contributing in a way that would be useful to a really good team.  That Indiana has not been really good to this point is not due to Hartman’s play.

4 – Next three opponents are against Morehead State, IPFW, and McNeese State at home.  Those appearance fee opponents should provide Indiana with a chance to catch its breath, recalibrate, and prepare for Notre Dame in the Crossroads Classic.  Don’t sleep on Morehead State though.  Sean’s Woods is a really good coach, and they will defend hard.

5 – There is plenty of talent on the roster.  You can’t teach what Indiana has in abundance, and while it remains to be seen if Crean can teach this group to defend with precision, grit, and intellect, the athleticism of the Hoosiers is beyond question.

6 – Maybe this tough stretch will breed humility.  The Hoosiers of the past two-plus seasons appeared to believe they hit a triple when getting to play in Assembly is actually third base.  They can be haughty and entitled, and that hubris needs to be corrected.  Losing might just bring them (Crean too) to their knees to ask for help.

7 – The media was wrong when they ranked IU #13, maybe they are wrong now to write off the Hoosiers.  Teams are rarely as good or bad as they are reported to be, and the media hates the Hoosiers this morning.

8 – 51% and nine turnovers.  Even when playing in a hostile environment like Cameron, Indiana executed offensively and scored very well.  Shooting 51% and committing only nine turnovers on the road shows an offense that can play at a high level.  That’s half the game, right?

9 – Off-court behavior has been out of the news.  It’s been over three months since one of the Hoosiers screwed up by getting caught with booze in the parking lot of the old Kenny’s Food Mart.  That’s not a huge accomplishment to be celebrated, but it beats the alternative.

10 – Tom Crean is going to keep working.  Say what you will about Crean, but he wakes up every morning engaged in the process of getting the most out of his team.  He works tirelessly, and hard work is the only chance the Hoosiers have to improve in a meaningful way.

That was much less hard than I thought it was going to be.  My only regret is in expending this much energy writing about a team that is failing to meet self-imposed unreasonably high expectations when Butler and Purdue have been playing so hard and well.  It would be a lot more fun to extoll the virtues of those two units than continue to focus on the Hoosiers.