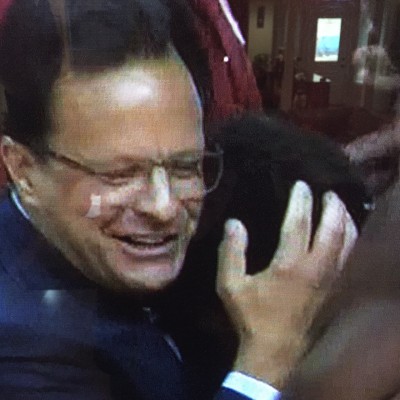 Indiana, Purdue, Butler, and IUPUI won.  The Pacers and Colts lost.  And I played on an untalented but gritty team in a three-on-three driveway event.  Throw some high school hoops into the mix, and there was plenty of good, bad, and a little creepy over the weekend.

Here is a list of my best and worst moments of central Indiana sports from the just-concluded weekend.

1 – Immediately after recovering a Pittsburgh Steelers fumble of the opening kickoff, Matt Hasselbeck threw an interception that foretold the kind of night the Colts would not enjoy in Pittsburgh.

2 – Michigan State’s 22-play game-winning drive was how a team playing for a spot in college football’s final four should win a conference championship.  There were five third down conversions and one on a fourth down from the Iowa five-yard line with the season on the line that brought Sparty a Big Ten championship.  The drive began with 9:31 remaining in the game and ended with just 27-seconds left on the clock.  It was thrilling for Michigan State fans and grueling for Iowans.

3 – Indiana won convincingly fashion against Morehead State Saturday night.  The Hoosiers bounced back from a miserable defensive game at Duke to hold Morehead State to a puny 31.4% field goal percentage.  Four Indiana starters tallied double figure scoring totals while none of the Eagles starters managed more than eight points and totaled only 22.

4 – With just over four minutes left in the Steelers 45-10 rout of the Colts, Antonio Brown took a Pat McAfee punt to the house to rub salt in Chuck Pagano’s wounds.  It was a microcosm of the night for the Colts as they were outplayed in all three phases, as coach Chuck Pagano lamented several times during his postgame comments.

5 – Kyle Guy showed why Virginia has decided to invest a scholarship in his basketball ability Friday night as he led Lawrence Central to a 75-51 win over Carmel.  Guy shot, drove, and dished, showing his uncanny knack for offensive basketball.  The Bears outscored Carmel 41-23 in a second half as Guy asserted himself.  Don’t be fooled by his slight frame, Guy knows how to play and compete.

6 – The hugs given Indiana players Yogi Ferrell and Troy Williams by Tom Crean toward the end of the win over Morehead State were odd and borderline creepy.  He pulled their heads to his neck and patted them on the back of their heads as though they were giant five-year olds who got an A on a coloring assignment.  I am generally a big fan of celebrating solid work, but this was awkward and icky.  If my son was hugged by a coach in that way, I would have to be talked out of being upset by my wife – and she would have been more off-put than me.  I’m trying to stay as unbiased as possible about Crean, but those hugs would have bugged my if IU was winning national championships every other year.

7 – While his teammates made only 25-67 field goal attempts, Paul George was white hot as the Pacers tried to finish their four-game west coast swing at Utah with a win Saturday night.  George scored a career-high 48 points as he knocked down 8-11 from beyond the arc and 15-27 overall. The Pacers will need a similar effort tomorrow night as they host the 22-0 Golden State Warriors.

8 – Playing in a driveway three-on-three tournament, I accepted a pass on the block, pump-faked, and was destroyed by an overzealous defender.  As I fell, the defender landed on my knees.  I thought it was possible my aging ligaments might snap under the sudden strain, but nothing more than some bruising resulted.  Regardless of your age, getting knocked on your ass once in awhile is good for the soul.  It makes you feel relevant somehow.

9 – IUPUI hammered Miami of Ohio at Indiana Farmers Coliseum.  I really like the direction Jason Gardner’s Jaguars are headed.  One of the reasons is freshman Evan Hall, who scored eight points and grabbed seven boards in 23 minutes.  Miami was really never in the game, and the Jaguars rolled.  Darell Combs knocked down 4-7 threes to lead IUPUI with 20 points.  If the Jaguars felt very good about themselves Saturday, tonight’s game at Purdue will likely bring them some humility, but that’s part of the program’s growth.

10 – Lavoy Allen’s foul on Derrick Favors as he converted a two-point shot with the Utah Jazz down three points with :10 remaining allowed Favors an opportunity to make a free throw to tie the Pacers and send the game to overtime.  In a close game, mistakes are always the difference between winning and losing.  Allen’s foul at the end of regulation didn’t have anything to do with the Pacers slow start or inability to close the game in overtime, but it was moment that directly caused that game to be removed from the win column for the Pacers.