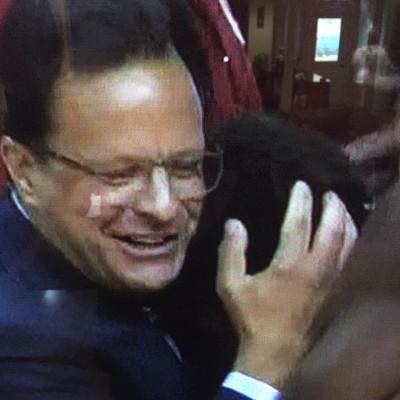 Some like this kind of hugging between a coach and player. Some don’t. All have a voice here.

The hugs for Hoosiers Troy Williams and Yogi Ferrell by coach Tom Crean toward the end of the Indiana vs. Morehead State game Saturday night have generated some attention over the past couple of days – some positive, some not.

Like most things Crean does, the hugs can be assessed in a variety of ways – some complimentary, some critical.

Rarely has there been a figure in sports whose actions could be viewed in such a wide variety of ways.

Here is a list of 12 takes on Crean’s hugs Saturday night:

1 – As a leader and coach, it’s important for Crean to show his love for players.  Hugging is a great way to do that.

2 – Crean wants to be perceived by players and fans as a close behavioral relative to Tom Izzo, who is a very emotional coach given to occasional outrage and overt displays of adulation.  The difference between Izzo and Crean’s hugs is that Izzy’s players initiate the hugs, while Crean engages his players.

3 – As has always been the case, Crean loves to celebrate positive results.  The hugs served as banner-esque affirmation for players who have been criticized for three losses and at least one win where consistent defensive effort was not displayed.

4 – What’s the big deal about a coach hugging players?  Crean is a father figure to many of his players and providing discipline and praise is important in their development.  Hugging shows love, and it’s good for a coach to love his players.

5 – Whatever the intent of the hugs, clasping a player’s head in order to nestle it in the coach’s neck and then enthusiastically patting it is a weird form of showing appreciation, and has no business being employed by an authority figure.  Can you imagine a boss reinforcing positive behavior like that during a staff meeting for an employee who closed a deal?  HR would be immediately dispatched.

6 – Can’t Crean do anything without being criticized?  Imagine if everything you did in your office was shown on ESPN or BTN and then scrutinized.  The way you walk in the halls, the way you drink coffee, the way you roll your eyes in meetings when the boss isn’t looking – all under review for millions watching.  You might develop some weird tics yourself.

7 – If the players and parents aren’t complaining, why is this even an issue?  Crean just can’t win with a lot of people, and those hugs are just the latest imaginary scab fans are picking to sully the reputation of a good, not great, coach.

8 – The hugs were icky, and coaches should never engage in icky behavior.  As a parent, I don’t want coaches, teachers, clergy, or counselors hugging my kid in that way.

9 – Those were hugs of an insecure leader trying to curry the favor of his charges.  Confident coaches should focus on the continued improvement of his players, not rewarding an outlier positive performance against a lesser opponent like Morehead State.

10 – Great coaches know when to pat an athlete on the back and when to kick him in the ass.  Crean gave those kids a little love in the spotlight after likely getting their attention using a different tack away from the cameras.  Regardless of whether the hugs were peculiar looking, a coach should be allowed and encouraged to show appreciation.

11 – Premature celebrations have always been a part of the Crean recipe for mediocrity, and these hugs were par for the course.

12 – Crean should be judged based upon the tenacity of Indiana players defensive effort, not the  unique way he bestows a little affirmation for his players.