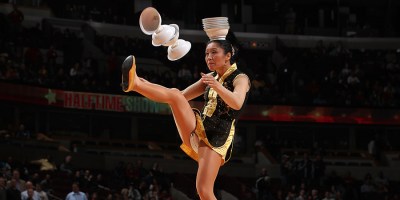 It appeared Red Panda – the unicycle riding bowl-balancing halftime act might be the highlight of the night for Pacers fans. Not so fast.

Nobody likes losing or cheering for a team that loses, but those who were at Bankers Life Fieldhouse last night as the undefeated Golden State Warriors visited had reason to leave without being depressed.

And, by the way, congratulations to the crowd who never abandoned ship on the Pacers despite the 28-point deficit at the end of the third quarter.  That faith was rewarded with a measure of fight that will likely define them this season.

Now, I’m not psychotic enough to think that looking at last night’s game as a relentless torrent of positive moments for the Pacers is rational for a Pacers partisan, but despite soft early defense, there was some good to focus on.

Here are the reasons last night’s loss to the Warriors didn’t ruin a night’s sleep for Pacers fans:

1 – Not a single team in the last decade of the NBA could have beaten the Warriors last night.  They played a virtually perfect first three quarters.  The level of execution and generosity in moving the ball on offense was so much fun to watch that fans were entertained despite being rooting for the Pacers.

2 – Klay Thompson was eight-of-10 from beyond the arc in the first half on his way to 29 points.  That kind of shooting night is virtually impossible to overcome.

3 – The Pacers continued to fight hard despite the extremely long odds in trying to recover from a 28-point deficit in just 12-minutes.  The bench guys found a way to cut the lead enough for the starters to have to return for both teams and make it a game late.  Cutting that insurmountable lead to six was a hell of an accomplishment.

4 – Thompson’s offensive outburst was the price for finding a way to stop Steph Curry – the leading scorer and most dynamic player in the NBA.  Given a choice of poisons, I’ll take the Splash Brother ESPN is not featuring in promos.

5 – The Pacers are trying to become the Warriors, and how much fun are the Warriors to watch?  This brand of basketball is so much more fun than the old plodding Pacers built to bang on the defensive end that fans should be thrilled the Pacers have embraced it.  If the Pacers can put together a roster able to run, pass, and chuck it from deep like the Warriors, tickets are going to be tough to get.

6 – Chase Budinger’s +/- was +18 during his 18 minutes of play.  That number is inflated because he was on the floor as the Pacers roared back in the fourth quarter, but the hard-nosed edge both he and Solomon Hill brought as they accounted for nine of the Pacers 16 offensive rebounds showed both are capable of contributing to success.

7 – The Pacers hit 10 more free throws and had five more field goal attempts than the Warriors.  Of course, that didn’t help them win, but we’re digging deep for good here.

8 – The Warriors were held to one field goal in the last three minutes.  Yes, the Pacers can defend a little bit, or the Warriors were exhausted from making the extra pass and knocking down shots during the first 45 minutes of the game.  Either way, when it came time to finish, the Pacers brought a lot of energy.

9 – Monta Ellis turned the ball over a season high six times, (the most since he posted seven on February 21, 2014, for the Mavs), and still the Pacers made it a game late.  Wasting possessions through turnovers when playing an offensive efficiency machine like the Warriors is death – or it should be.

10 – Fans stayed in the building and got loud – really loud – down the stretch.  A few years ago, the Fieldhouse would have emptied at halftime of a game the Pacers trailed by 19 – despite the unicycle-perched bowl-balancing charm of Red Panda as the intermission entertainment

The Pacers weren’t perfect last night.  In fact, through three quarters, they weren’t very good.  The defense allowed the best offensive team in the NBA too much room to operate, and made them very comfortable on a night when they should have had to fight for every open look, but focusing on the negative this morning just didn’t seem like a lot of fun.

The difference between good and great is what Pacers fans (and players) learned against the Warriors.  The Pacers are a playoff team, not a championship contender.  Now they know how wide the chasm is between where they are and where they want to go.