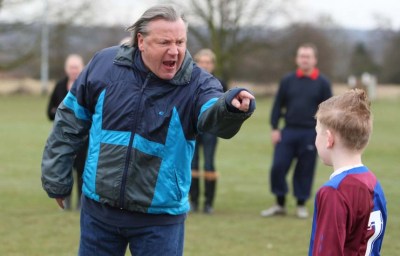 Pointing at a kid while you talk is a good sign you should take a deep breath and re-think your position.

There is a harrowing and tragic first-person recollection by former NHL player Patrick O’Sullivan about beatings, fear, and misery inflicted by a father at theplayerstribune.com that all sports parents should read.

O’Sullivan’s dad was a frustrated hockey player who tried to live his failed dreams through Patrick.  His motivational techniques were barbaric, and while O’Sullivan played in the NHL for several years, the emotional and physical torture inflicted caused scarring that will never heal.

Sports parenting is an inexact art, as is all parenting.  Kids have dreams, parents invest emotionally and financially in realizing those dreams, and suddenly things spiral out of control in a way that fill todays with fear and tomorrows with regret.

The problem isn’t necessarily the development of ambitious goals by and for kids, but that a child’s success in sports leads to a feeling of validation for a parent.

Here is a list of positive sports parenting tactics built through experiences among many who did it the right way, and several who were a total mess:

1 – Your kid isn’t the only one out there.  If your son or daughter plays a team sport, there are teammates who should be considered as something other than impediments between your child and success.  Support them, and your child will learn how to be a supportive teammate, which might be the most valuable longterm outcome of participating.

2 – Listen to your child.  There is a feeling among parents that more is better.  We work long and hard at our jobs everyday, and go to bed at night thinking about how to do it better and harder tomorrow.  Forcing children to wrap their arms around that regimen in youth sports can cause burnout and worse. If the kid doesn’t want to work, the work he or she is forced to do won’t bring a positive result anyway, so when you hear, “I’m tired of (insert sport here),” listen.

3 – Make the work fun.  Nobody ever said that focused work had to be monotonous and unpleasant.  Any time you have a chance to make a game out of work, you enhance the likelihood the kid (or adult) will want to do it again.

4 – Choose your coach wisely.  There are a few sure ways to kill a kid’s enthusiasm for sports. Being coached by an idiot is at the top of the list.  There are plenty of different kinds of youth coach idiots – and most are really smart people with out-of-whack sets of priorities.  If a coach demeans a player, grab your kid by the hand and walk him to the car.  Do not return.  Practices should be well-organized and positive, and games should provide an opportunity for all to play and improve.  Even at the travel level, everyone should play.  If winning is a higher priority for coaches than development, find another coach.

5 – Count the smiles.  If your kid and other kids on the team walk away from games with a smile, that’s a good situation.  There will be kids driven to succeed who may take losses seriously, and that’s fine.  But the games and practices should be fun.

6 – Don’t worry about emotions bubbling to the surface.  I can’t begin to count how many kids I saw cry after failing at the plate or on the basketball court.  At the time, I thought they needed some help to see the game as fun and not worth tears at every single strikeout, missed shot, or fumble.  Virtually all of them have been successful – really successful – in sports and life.  Kids are wired differently, and those who respond emotionally to failure seem to thrive competitively – as counterintuitive as that sounds.

7 – Fund work only if requested by the kid.  If your son or daughter asks you how to get better, get to work trying to find a great private trainer or training facility.  Don’t sign up without a little auditing on your own.  Make sure the work is personal and focused, and that the sessions are enjoyed by the athletes.  If you are in Indianapolis, consider yourself fortunate.  There are a lot of great places for athletes of all ages to get the most out of their training efforts and dollars.

8 – Enjoy the games.  Understand and forgive yourself for being emotionally invested in your child’s performance.  That’s a genetic quality in most parents.  Being nervous about a fourth grader playing basketball is ridiculous, but impossible to avoid.  Embrace it, but find a way to keep evidence of your emotions under the surface.  My technique was to either videotape the games or keep a scorebook.  The distraction engaged my brain in something other than responding to a blown call or coaching blunder.

9 – Let your kid solve his or her own problems.  Never talk to a coach about playing time – ever.  When children want answers about why they aren’t starting or playing, tell them to ask the coach what they can do to earn more.  Teaching a kid to solve his or her own problems and politely confront the source of their discontent might be the most important lesson they take from youth sports.

10 – If you see parenting that bothers you, try to correct it.  As O’Sullivan writes in his theplayerstribune.com post, if a parent had confronted his dad, maybe he would have been saved from a horrifying childhood.  The parent will likely be offended – at least initially – but most non-sociopaths will eventually reflect upon reasonably delivered and well-intentioned advice from a peer.  Some will change their behavior and some won’t, but being an advocate for a kid unable to do so on his or her own is worth the effort.

Here are a couple of bonus entries:

If you remember nothing else – just be nice and remember it’s about the kids, not you.  Those two basic tenets will put you on the path to enjoying the experience, and make certain your child enjoys him or herself.