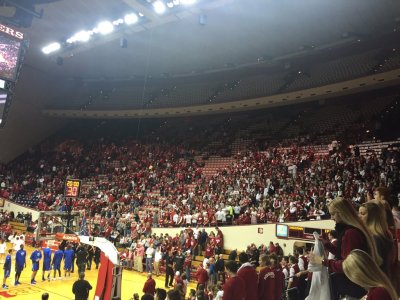 Just prior to the tip against IPFW, empty seats and filled seats appeared roughly equivalent. Those empty seats are there for a variety of reasons.

On my way home from hosting my radio show last night, I listened to Jake Query explain the decline of Indiana Basketball under Tom Crean on his radio show.

He compared IU hoops to a Tonka Truck. Back in the day, Tonka toys were virtually indestructible.  Dads could pass them down to sons they lasted so long.

Today. Tonkas look the same, but in six months they wobble.  In a year they are in the trash.

Like Tonkas, Indiana Basketball looks the same as it did once upon a time with the Candy Stripes, under eight timeout celebration, no names of the jersey backs, and Chuck Crabb on the PA, but if you scratch a little paint off the surface, you see that the program is different.

I liken it to a circus I saw when I was a kid.  After a couple of trips to Chicago Stadium to see the Ringling Brothers and Barnum & Bailey Circus, I was excited when a circus came to my hometown 35 miles north of Chicago.

This circus had elephants, clowns, trapeze artists, a lion tamer, and the cotton candy tasted the same, but it wasn’t Ringling Brothers and Barnum & Bailey’s.  I left disappointed and cheated because this circus – despite being so similar to the circus I loved – just wasn’t the same.

That’s why I don’t make the drive to Bloomington for basketball games anymore.  I am tired of trying to convince myself that a ringmaster is a ringmaster, and a clown is a clown.  That’s my reason for one seat among thousands at Assembly Hall being empty for games like the one against IPFW Wednesday night.

Here are the total of 10 reasons for the other empty seats:

1 – Like I wrote, regardless of his impressive efforts, Tom Crean isn’t a ringmaster capable of organizing a circus like those I enjoy.

2 – Finals.  Students might need to study for next week’s final exams for which they are woefully unprepared.  Some might study all weekend.  Others will pick and choose their spots.  Given a choice between watching the Hoosiers dismantle IPFW on Wednesday or a night in the bars Thursday, they opted to study Wednesday to accommodate the Thursday hoopla.

3 – Quality of competition.  When you schedule programs like Morehead State, IPFW, and McNeese State as home opponents in a span of eight days, there is going to be some tomato can fatigue.  Making the drive down the perpetually under construction State Road 37 from Indy to Bloomington or the mile walk for students from Willkie Quad to watch a certain win becomes less attractive with each journey.

4 – Players seem aloof.  Compared to the every man vibe of the football team, the basketball players are removed from the fabric of the student body.  That’s what I have been told by more than a dozen IU students.  Back when I was a student, the players were always at our parties and very accessible.  Rooting for Dan Dakich, Winston Morgan, Marty Simmons, and Uwe Blab was easy because they were much more gifted athletic versions of us.

5 – Parking is a little more difficult.  The renovations to the south end of Assembly Hall has caused a scarcity of parking, or at least a disruption of routine.

7 – More entertainment options.  Students and adults have a lot more to do/watch today.  With the enormous palette of options begging for their time, trudging to Assembly Hall to watch this level of basketball would rarely bubble to the top.

8 – Consistent mediocrity.   In 49 states, you can trick fans into believing brighter days are ahead, but this is Indiana.  Crean can try to fool Indiana fans into buying his unreasonably optimistic narrative, but not when delivering the same bill of fare every year.  The defense has been terrible for more than two years, and fans see it.

9 – Purdue and Butler are bringing consistent effort.  Fans watch Indiana play and then Purdue or Butler, and wonder what the hell is the matter in Bloomington.  I spent 11 semesters plus one glorious summer at IU as a college student, and I would rather watch the Bulldogs or Boilers than the Hoosiers.  That’s sad in a lot of ways.

10 – Fans don’t like being conflicted.  Sadly, there are reasonable people in Indiana who root for Indiana to win, but believe championships are going to be scarce until Crean is gone.  They know Crean will never be replaced until fans respond to mediocrity with indifference.  That attitude might not reflect the majority of fans, but more and more of those to whom I speak are avoiding IU games because of that duality.

The oddest part of the 2015-2016 season might not be the growing indifference of fans, but the success of this team seemingly incapable of playing defense with consistent tenacity and discipline.  The Big Ten is in such a goofy state that Indiana could finish 12-6 or better.  The Hoosiers play what are assumed to be the three best Big 10 teams (Michigan State, Maryland, and Purdue) only once and two of those are at Assembly Hall.

These are weird times in Bloomington.  Clarity and passion are unlikely to visit anytime soon.