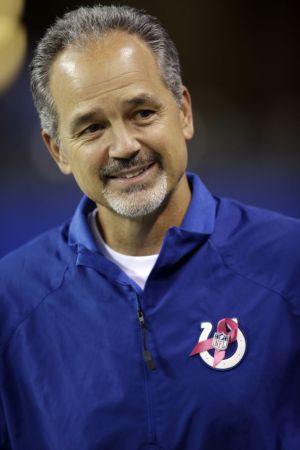 Chuck Pagano has told the media, “They can fire you, but they can’t eat you.” as an answer to the question of the possibility he will lose his job. Barring something strange happening, we’re about to find out

We take no joy in expecting coaches to be fired, but coaching is a profession that welcomes close scrutiny by fans and media and the direction of college programs and pro franchises are a big deal to many of us.

Once the winds of change start blowing, they are very difficult to stop as Colts coach Chuck Pagano is discovering.  Rick Venturi – a coach who has been fired himself – has said many times, every football team is a three game losing streak from chaos.

if the Colts lose Sunday to the Texans, it will bring the Colts their second three-game losing streak of the season.

There is a half-life for every coach, and the only way for virtually every one of them to avoid being fired is to beat their bosses to the punch and quit.  The one untouchable college coach seems to be Mike Krzyzewski, who would likely have been fired early in his run at Duke if it happened in 2015 instead of 1982.  Joe Paterno was thought to be completely impervious.  Not only was he fired – he was killed!

Here is the list of the best known Indiana pro and college coaches ranked by the odds they will lose their jobs in 2016:

Chuck Pagano, Indianapolis Colts – 99.44%.  Adios, Chuck.  An unfailingly nice and respectful leader of the Colts, he is almost certain to go shortly after the season ends.  Sure, he speaks in cliches, but in these days of misinterpreted utterances from coaches, who can blame him?  If the Colts don’t advance to the Super Bowl, and that seems a virtual certainty right now, Pagano is going to be gone.  It won’t be because he is a bad coach, but because the front office made the call before the season not to extend Pagano’s contract for more than a year after 2015 – the final year of his four-year deal.  Pagano demanded more, and refused to agree to a one-year extension.  Is it the right call to can Chuck?  I’m not sure, but it looks like a done deal.

Tom Crean, Indiana Basketball – 51%.  The empty seats speak loudly in the offices of decision makers in Bloomington.  Fan indifference for Indiana Basketball is intolerable, and season ticket holders are checking out for a variety of reasons.  The relentless and repetitive sales job Crean has extended in every utterance since 2013 has worn raw the Hoosier fan base.  If AD Fred Glass can find THE right guy for the gig, IU will bite the buyout bullet and make a change.  If left with the typical options – like Tom Crean represented in 2008 – IU is better off waiting until THE right guy is ready.  Hiring the wrong candidate is a far worse outcome than retaining Crean.  That might save him.

Darrell Hazell, Purdue Football – 8%.  The $6.7 million buyout has saved Hazell, who would have been fired already if he was going.  Purdue is not good, and doesn’t appear to be putting itself in a position to make appreciable improvement, but Purdue is not writing a check like that to say adieu to Hazell.

Kevin Wilson, Indiana Football – 4%.  The only way Wilson is punted is if some calamitous personal issue arises, and it seems like the chances of that happening have diminished from likely to nearly zero over his five-year run.  Sometimes a coach can grow into his job, and Wilson seems to be a good example.  Bowl eligibility saved Wilson, and that was conferred upon IU because of a dropped pass on a two-point conversion in the season opener against Southern Illinois.  Sometimes a single play sinks a coach, and sometimes it can save him.

Frank Vogel, Indiana Pacers – 2%.  The Pacers would have to completely collapse for Vogel to be asked to leave, and even then it would be unlikely.  Already the longest tenured coach in the Pacers 40 seasons in the NBA, Vogel’s message and leadership still reaches his players.  A genuinely good guy who has also grown into a position as a very effective leader, Vogel might just be getting started.

Chris Holtmann, Butler Basketball – 1.7%.  Great guy.  Great coach.  Butler way proponent and recruiter.  How does Butler keep hiring the right guy?  And I DO believe Brandon Miller was the right guy too, but Holtmann was absolutely perfect to steer the program through some choppy waters after Miller’s abrupt departure for still undisclosed reasons.  if Holtmann leaves, it will be because someone offers him the kind of cash Butler can’t match.

Matt Painter, Purdue Basketball – 0.7%.  He was on very thin ice a couple of years ago, but Painter corrected course by taking his program back from a team of superior athletes he recruited without regard to how they might function as a unit.  Now, with a bunch of hard nosed committed teammates focused on the welfare and success of the whole more than personal gain, Painter has the Boilermakers rolling undefeated into a week when they will be tested by Butler and Vanderbilt.

Stephanie White, Indiana Fever – 0%.  I don’t believe in a 100% prospect of a coach returning – except in the case of Stephanie White.  She is smart, shrewd, genuine (no, shrewd and genuine are not mutually exclusive), and a superior ambassador for the Indiana Fever, women’s rights, LGBT equality, and Pacers Sports & Entertainment.  If you can show me a weakness in her ability to lead, her character, or how she communicates her message, you will be the first.