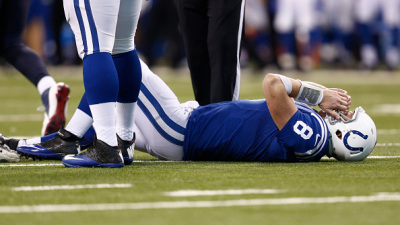 Matt Hasselbeck might be the toughest man ever to play for the Colts.

The tough part of a beautiful fan-friendly event like the Crossroads Classic is that two really good teams are guaranteed to leave Bankers Life Fieldhouse as losers.

The miserable part of playing/coaching/cheering for the quickly aging Indianapolis Colts is that eventually the bill comes due for a lifetime of dings, bumps, bruises, sprains, breaks, and tears.  That bill came due yesterday for the Colts.

The wonderful part of watching high school basketball is that every once in a while you get to see greatness before everyone else comes to accept it.

A wide range of emotions were evoked during a crazy weekend of sports in Indianapolis.  Here are my favorites:

1 – Matt Hasselbeck was a badass’s badass yesterday.  Forget that the Colts lost a huge game yesterday.  The result doesn’t diminish the valor shown by a 40-year-old quarterback who came into the game beat to hell and took vicious hits throughout the game.  He bounced back again and again, defining a recently overused word – grit.  If Hasselbeck retires after the season, he’s going out with a legacy of toughness.

2 – Troy Williams lifts Indiana to win.  Watching the game live, I thought Tom Crean putting Indiana in a 2-3 zone midway through the second half was key in changing the tone of the Crossroads Classic game against Notre Dame, but in re-watching it is clear that Williams bringing some frenetic effort in the second half brought the Hoosiers back from a 15-point deficit.

3 – Butler overcomes Kellen Dunham’s tough day.  if you had told me Butler could beat previously undefeated Purdue despite Dunham going 0-12 from the field and Kelon Martin hitting only 2-9, I would have run to get an ice bag, put it on the back of your neck to bring down your core temperature, and called the paramedics.  Roosevelt Jones, Tyler Lewis, and Andrew Chrabasz did enough to give the Bulldogs a great win over a team with Final Four level talent.

4 – Paul George continues to show the need to mature.  At some point the switch is going to flip for Paul George.  Self-bequeathed nicknames and bickering with officials will finally take a backseat to understanding that what is coming is far more important than what has just been.  George said “s**t” during a postgame diatribe with Fox Sports Indiana’s Jeremiah Johnson immediately after a comeback win.  George posted an efficient double-double regardless of the refs.  He was fined $35K for his comments.  That’s unlikely to get his attention, but something will.

5 – New Albany’s Romeo Langford is very likely going to be 2018’s Mr. Basketball.  I’ve seen him twice in the last two weeks, and it’s hard to describe how special Langford appears to be.  He’s a good defender regardless of the position (he jumps center, but projects as a two), and can score from anywhere.  He’s as stoic and instinctive as Mike Conley, and has athleticism that is beyond elite.  I’ve heard rumors he might be considering a transfer to Oak Hill, and that would take him out of Mr. Basketball talk, but in terms of ability and level of play, he has no peer.

6 – Chuck Pagano leaves Lucas Oil Stadium with family.  I walked out of the Colts locker room with Chuck Pagano and two members of his family, who I assumed were his wife and one of his three daughters.  The three seemed to embrace Pagano’s recent quote, “They can’t eat me.”  At this point, Pagano’s fate is all but sealed, but he and his family enjoyed that moment together after a tough loss.  Life is all about priorities, and spending time with loved ones after losing a football game is a great way to remind yourself of what really matters most.

7 – P.J. Baron goes off for Carmel to lead comeback.  I’m usually pretty good at seeing the guys who wear #30 on a basketball team, so while I’m not certain that Baron only played late in the game Saturday night against New Albany, I believe it to be so.  And when he came in, Carmel was reeling.  Baron went off for nine quick points, and brought the Greyhounds back from the dead to force a tie at 53.  It’s always fun to see a seldom-used kid explode for much needed offense, and that’s exactly what Baron did.

8 – I learned who Lyonel Anderson is.  Indiana’s strength and conditioning coach was front and center in front of the Hoosiers bench Saturday afternoon.  Anderson was either on his feet begging IU fans to get involved, imploring the Hoosiers to get their hands up, or relentlessly shouting a variety of messages at players.  There were times I wasn’t sure who the hell the Indiana coach was.  I’m not sure a team already on an emotional edge needs a strength coach amping the mood, but if Anderson’s in-game responsibility is to cavort, exhort, and gesticulate, Crean hired a gem in Anderson.  I can’t believe I’ve never noticed him before.

9 – Chris Holtmann is establishing himself as one of the best hoops coaches in America.  How is it that Butler is so consistent in its effort and execution?  The only plausible answer is that Holtmann instills discipline, and continues to recruit young men who want to be taught.  The Bulldogs victory over Purdue is the latest among many instances of Holtmann getting the most out of his team under duress.

10 – The Colts are going to head in a new direction after this season.  Regardless of the health of Andrew Luck, this roster is not championship ready, and the people who are responsible for assembling it are likely headed out.  It’s unimaginable that Pagano could get gassed while the staff who blew the last three 1st rounders gets a pass.  An old roster can put together a nice September and October, but the second half of the season gets long for the aged.