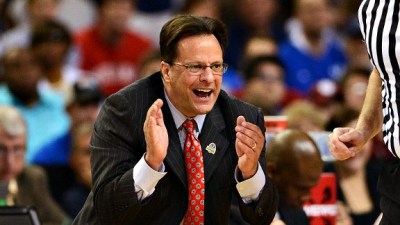 I want to help Tom Crean (above) to become a better steward of the Indiana Basketball program, and so I offer eight areas for improvement in performance.

Indiana University’s basketball program is not where anyone wants it to be – not fans, not coaches, not administrators, and not players.

You can tell coaches aren’t happy with where Indiana is in the present because they spend a lot of time and effort selling everyone on a future filled with accomplishment and success.  Anytime the Hoosiers achieve any goal – or even a pedestrian win – they celebrate like the 1976 team did when they finished their undefeated season by beating Michigan in the National Championship game.

There have been welcome cosmetic changes in the program, mostly for Tom Crean, who for the first time in my memory is sitting during parts of the game.  Does that help players play better?  Probably not, but it does convey a sense that Crean understands the action on the floor is more important than his performance.  The pacing, posing, clapping, and swigging have diminished.

That will please some, but I’m more interested in what happens on the floor than with the theatricality that annoys Crean’s detractors.

Rather than complaining and whining about Crean continuing as the coach, I have put considerable thought into sharing eight specific areas of improvement that are necessary for Crean to succeed at Indiana.

Here are those eight changes that need to happen for Crean and the Hoosiers to return to the elite status everyone either craves or insists still exists (reasonable people know those days passed 20 years ago):

1 – Rebuild fractured relationships with Indiana high school coaches.  As I talk to high school coaches, I always ask off the record about Tom Crean.  Some are politically correct and deflect.  Others are quite honest, and those reports are very instructive as to the level of respect with which they hold Crean compared to Purdue’s Matt Painter and Butler’s Chris Holtmann.  Being out-respected has made it very difficult for Crean to recruit the state’s best talent.  If Indiana needs to rely on Boo Williams to steer kids toward Indiana, the Hoosiers will be what fans have seen the past two-plus years.  Recruit elite talent in Indiana, and there is a chance to win championships.

2 – Instill a defense – one defense – and play it well.  Better to execute mediocre strategy at an excellent level than to execute excellent strategy at a mediocre level.  For years, Indiana has appeared to be confused on defense.  It’s better to do one thing at a high level than try to out-fox opponents with a team incapable of achieving a positive result in that scheme.  Watching Indiana play a 2-3 zone every possession would be nauseating, but better than this hybrid where zone becomes man.

3 – Fish with a rod and reel, not dynamite.  When you recruit everyone and offer 50+ prospects, a lack of specificity is shown in your criteria for candidates.  If you represent an elite program, you select the recruits you target with great care.  If a coach can’t land recruits he targets, he is not capable of running an elite program.

4 – Stop celebrating every small accomplishment like it’s life-changing.  When Crean was hired by Indiana, a friend called to wish me luck as an Indiana fan.  He said, “Crean hung a banner when Marquette won the Great Alaskan Shootout.  That’s all you need to know about Tom Crean.” [ed. note: that banner was sold in an online auction in 2012 and no longer hangs in the Bradley Center – bidding ended at $376].  Indiana celebrates wins like desert bedouins celebrate an oasis.  Celebrations should follow meaningful accomplishment, not what should be perceived as ordinary wins.  Cutting down nets after a loss and awarding Sweet Sixteen rings are additional items on a long list of oddly executed bizarre parties held for a team that fell short.

5 – Undersell so expectations are reasonable.  Every year, those speaking for Indiana Basketball talk about why there is hope for an imminent return to the Final Four, upper echelon of the Big Ten, and the Hoosier birthright of peer status among college basketball’s elite.  Every year, the fires of hope are doused by the chemical foam of mediocrity.  If for no other reason than changing routine, tell us that this is going to be a really tough year.  If the Hoosiers than finish in the top four of the Big Ten, fans will be thrilled.

6 – Schedule real opponents in the non conference season.  Tonight marks the final noncompetitive non-conference opponent of the 2015-2016 season.  Continuing to ask for substantial donations for the right to buy tickets to games at Assembly Hall against McNeese State (RPI #312), Morehead State (#181), Kennesaw State (#227), SIU-E (#210), Austin Peay, and Alcorn State (#311) is no way to run an elite franchise.  [ed. note: I left out IPFW among the cupcake opponents to visit IU this season for two reasons – they are pretty good and keeping the appearance money in the IU family is a positive.]

7 – Tell the strength coach to sit behind the bench.  Before the Crossroads Classic win against Notre Dame, I hadn’t noticed the omnipresent enthusiasm of Indiana strength and conditioning coach Lyonel Anderson.  Crean’s bench has always been chaotic with assistants simultaneously yelling at multiple players, but Anderson’s histrionics even distracted me as I sat in Section 19 at Bankers Life Fieldhouse.  From warm-ups thru the final buzzer, Anderson exhorted, cajoled, gesticulated, cheered, waved, and beseeched in a nonstop frenzy.  Successful leaders keep messages simple so they are easily consumed and implemented.  Crean’s bench unleashes a torrent of messaging that is exponentially exacerbated by Anderson’s mania.

8 – Build a culture with successful young men.  Assessing personality is a critical aspect of hiring, and recruiting basketball players is no different.  If you are forced to sacrifice a little athleticism to gain some grit and basic understanding of team function, that’s an easy call.  Indiana’s roster is filled with players of a myriad of attitudes and aptitudes.  Watching Butler or Purdue, there is a clear sense of unified purpose that has not been displayed by the Hoosiers since 2012-2013.  A team cannot be built with physically talented but disparate ill-fitting parts.  It must be constructed with personalities that fit together to form a unit.

Just trying to help.  If you think what’s happened the last couple of years is good enough, no need to make any changes.