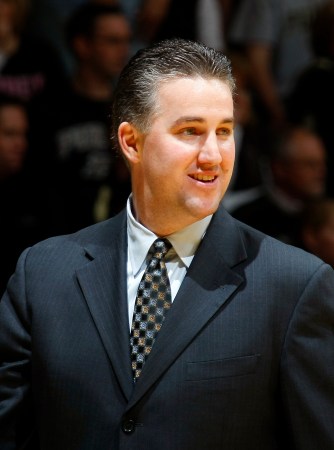 If Purdue coach Matt Painter looks like he’s having a good time coaching the Boilermakers again, the 10 reasons are clear.

Purdue won it’s Big 10 opener last night in Madison, Wisconsin 61-55.  Fans are hopeful this might be the year that the Boilermakers finally fulfill their dreams of returning to the Final Four, and they have reason to be excited.

In fact, they have 10 reasons to be excited:

10 – They are due.  It’s been since 1980 that the Boilermakers have gone to the Final Four, which means it’s about time for a return.  The best player on the last Final Four team for Purdue – Joe Barry Carroll (after whom Kellogg’s or Post should have named a cereal) – will turn 58 the next time he celebrates a birthday.  And current coach Matt Painter was nine years-old when Purdue travelled to Indy for that Final Four..

9 – Matt Painter returned Purdue to a culture of toughness.  There was a period when Painter tried something new – something un-Purdue.  He recruited exceptional athletes whose efforts were unencumbered by grit.  The program flagged to the point where pundits believed the job of the guy anointed as legend Gene Keady’s replacement was in trouble.  A quick about face toward recruiting tough defenders followed, and Painter is now reaping the benefit of his efforts.

8 – Big Ten has no other dominant team.  Michigan State is good when Denzel Valentine is healthy, but nowhere near a dominant front runner.  Party’s loss last night at Iowa revealed a team that has flaws  Maryland is good, but shows inconsistency.  The rest of the conference – except Rutgers – is capable of winning or losing against anyone.  Rutgers is capable only of losing to everyone.

7 – Roster filled with Indiana kids.  I often toot the horn of Indiana high school players, but I don’t apologize for it.  If you recruit the right kids from Indiana, you can and will win.  There are 10 players from the Hoosier state who play for Purdue, and they know how to play basketball.  Indiana kids aren’t more athletic, longer, or taller than young men from other areas, but they know how to play winning basketball on both ends.  Indiana kids aren’t nearly as concerned with Sportscaster-esque highlights – just winning.

6 – Basil Smotherman is redshirting.  “Spice” would start for at least half the Big Ten, and Painter felt good enough about his roster to honor his request to redshirt this season.  That says a lot about the Boilermakers depth (which we discuss at #2).

5 – Senior leadership.  It’s easy to dismiss the leadership of senior A.J. Hammons, but he seems to have responded to the adversity Painter meted out for whatever transgression he was responsible for.  The benching ended, so we surmise the young man responded positively to his penance.  There is leadership in accepting punishment.  And then there is a legit, no debate leader in Rapheal Davis who has answered every challenge in his four years at Purdue with hard work and dedication.  Rebuilding the Boilermaker culture required a guy like Davis to step up and embrace it without promise of reward.

4 – Matt Painter.  The three-time Big Ten Coach of the Year finally has a complete roster worthy of his leadership.  Players reflect his toughness and they respond to his honesty.  This is a productive marriage of coach and players that has Boilermakers fans dreaming big.

3 – Shooters.  To run an offense where bigs can be productive, you need shooters to occupy the wings and keep double-teams to a minimum.  Dakota Mathias returns as a solid shooter, and Painter recruited a great high school shooter in Ryan Cline of Carmel.  During Cline’s four years as part of the Carmel program, the Greyhounds won two state championships and compiled a 92-11 record.  He shoots, scores, and wins.  When Purdue’s bigs are occupied, Mathias and Cline can score in bunches – as Mathias showed last night with his two huge threes late in the game that provided the margin of difference in a game the Boilermakers might have otherwise lost.

2 – Depth.  The Boilermakers rotation boasts 10 guys who average between 14 and 27 minutes.  The top six scorers average between 13.3 and 8.3 points per game.  Purdue seems not to care who has a big night or who needs to sacrifice when another player has the favorable matchup.  That selflessness and depth will pay dividends throughout the season and in March specifically.

1 – Size.  Other than the 30 in the NBA, no team in America has three bigs who can matchup with Hammons, Isaac Haas, and Caleb Swanigan.  Haas and Hammons rotate, so they always have fresh legs at the pivot, and Swanigan is one of the most talented freshmen in the Big Ten.  Stopping the bigs from getting their points while also trying to get a hand in the face of shooters is going to be tough for anyone.  On the other end, Purdue will always boast unrivaled rim protection and rebounding.

Can’t wait for March, but getting there for Purdue fans is going to be half the fun.