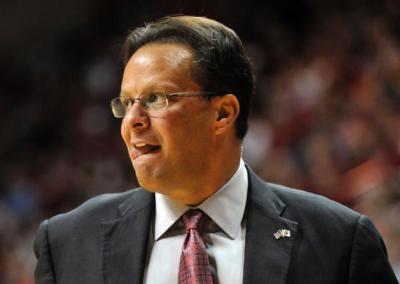 The question isn’t whether IU has trouble early in the 2nd half or how important that period is – it’s whether Tom Crean is to blame.

Indiana lost at Michigan State Sunday, and the murmurs about Tom Crean being overmatched started again.  Most of the time, I dismiss them as fans who watch and react with passion to what they see and understand about basketball, which often is not much.

I saw some tweets about second half adjustments that appear to be lacking, and thought to dig back a couple of years to see how Indiana fares during the first five minutes of the second half as compared to the rest of the game.

Many Indiana fans recall Bob Knight saying the first five minutes of the second half is the most important stretch of the game.  They infer a lack of success during that period equates to Tom Crean being out schemed by his counterparts because Knight was often quite good at it.

So I did some rudimentary research that suggested Indiana has indeed had some trouble this season in the first five minutes of the second half.  Then I dug into the 2014 and 2015 Big Ten seasons because 49 games should provide an accurate snapshot.  The non-conference and postseason games were eliminated  from the sample because the opposition is different from year to year, as is the focus of the players.

Two questions need to be answered to make a case that Crean’s halftime adjustments cause issues leading to Hoosier losses.  Does Indiana fail to compete during that period?  And, are the first five minutes of the second half reliable indicators toward winning and losing?

Here are the results – imperfect, but not entirely unimportant:

Those four points beg the question – how relevant are the first five minutes of the second half?  As it turns out, they are pretty damn relevant.

There is a third question, and that is whether Crean’s schemes are responsible for Indiana failing during that crucial five minutes.  Can it be the players, several of whom have been around for a majority (if not all) of the games during this truncated period?  Only people in the locker room understand whether it’s players or strategy to blame for the proportionate failures of the Hoosiers to effectively compete during a window when the coach should be able to have a profound effect.

None of this definitively shows anything about Crean or the Hoosiers, but it does validate the suspicion that Indiana has difficulty during the five minutes immediately following halftime adjustments.

That much we can say for sure.

3 thoughts on “Indiana Basketball – Does Indiana come out of halftime ready to compete? Does it matter?”