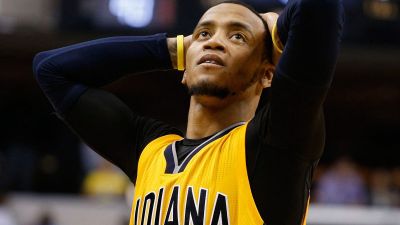 Monte Ellis cares more about winning than being liked, and that’s a pretty good reason to like him.

Ellis hit only two of 17 shots (worst shooting percentage in the NBA this season for a player with more than 15 attempts), and missed a free throw late that would have won the game for the Pacers in regulation.  Instead, the game went to overtime, and overtime has not been good for the Pacers this season where they have put together a horrible 1-6 record.

If you had to point to a single reason the Pacers lost last night, there is no doubt Ellis would be it.  George Hill was 0-for-7 from the field, so he wasn’t without blame, but Ellis was brutal.

There is no better time than today to remind ourselves of the very good things Ellis does to make himself worthy of some love as the Pacers move into the final third of their regular season.

As he is the Pacer least interested in being liked, it might seem odd to list 10 reasons to love him, but while we mourn the missed shots, we shouldn’t ignore the good stuff too.

Here are the top 10 reasons to love Monta Ellis:

10 – He turned down more money to come to the Pacers.  As residents of a city not renown for much, nor gazed at with envy from those who live in many of America’s 50 largest cities, we especially like those who like us.  Ellis showed his affection for the Pacers and Indianapolis by reportedly taking a few bucks less to come here than roll out to Sacramento.  I know.  Sacramento.  Not exactly the Big Apple, Windy City, or South Beach, but still.

9 – No night owl behavior from Ellis.  If Ellis does much outside basketball and fishing, I never hear about it.  His favorite pastime is sitting alone in a boat with a line or two in a river or lake.  That doesn’t sound like a guy who is going to be clubbing at 3:30 in the morning screaming, “You can’t arrest me!  I’m Monta Ellis!”  There was the sexting scandal when he was with Golden State, but that appears to have been an isolated incident.  Basketball, fishing, family.  That’s about it.

8 – Monta’s contract is reasonable.  Because of the new salary cap that will go into effect next season, Monta’s deal (worth $11 a year through 2018-2019) will be a bargain after this season.

7 – Monta isn’t running a corporation.  Monte Ellis plays basketball for a living.  He is not a brand-building one-man conglomerate.  Basketball, fishing, and family are the only focuses in his life.  In an era where money made for off-court endorsements can dwarf NBA salaries, his reluctance to enter that world runs counter to many.  When Ellis makes a decision about his career, there is no panel of advisors at a conference table with him.  It’s not a bad thing to view yourself as a brand, but it’s not good when you have 13 guys on a roster doing it.

6 – He takes The Weight late.  With the game on the line, Ellis is very comfortable driving hard to the basket, creating contact, and taking the last shot.  He’s won a lot of games for the Warriors, Bucks, Mavericks, and Pacers that way, and given the reluctance of Pacers in the recent past to shoulder that burden, Ellis taking it strong is a great piece of the puzzle for their success.  Lyrics to the Ballad of Monta Ellis (with apologies to The Band) go like this:

I pulled into Bankers Life, was feeling like I might get hot
I just need some place where I can get up a shot
Hey, mister, can you tell me, where a man might find an open look?
He just grinned and shook my hand, “No” was all he said.
Take a load off PG, take a load for free
Take a load off PG, and you put the load right on me

5 – Pacers needed a hard and cold killer, and that’s Ellis.  The Pacers are nice guys who enjoy a postgame hug with opponents win or lose.  Ellis only cares about his performance during the game – not being popular off the court among his peers – or at least it appears that way.  It also appears that Ellis doesn’t only enjoy the Pacers winning, but the losses those wins bring to the Pacers’ opponents.  Sending opponents home miserable seems to please Ellis.

4 – Monta will keep teammates humble.  Early this season, I asked rookie Myles Turner if he was the best shooter on the Pacers as team president Larry Bird suggested a day or two before.  Before Turner could answer, Ellis yelled “Hah!” and started laughing.  Turner and fellow rookie Joe Young appear to be fairly modest guys regardless, but Ellis has certainly been a component in their humble attitudes on the court and off..

3 – Late game drives will send him to the line.  Settling for late jumpers has long been a frustrating late game trait of the Pacers.  Ellis has no problem exploding past (or into) a defender to create an offensive opportunity that otherwise would not have existed.  He’s a tough guy who might lose, but won’t be beaten.

2 – Make or miss, Monta is always going to be Monta.  Last night in Miami, none of Ellis’s 15 missed field goal attempts kept him from making or missing another shot.  Scorers know the baskets will come eventually if they keep shooting.  Water finds its level, and Monta Ellis knows that.  NFL coaches say that cornerbacks need to have a short memory.  Shooters need one too.  Ellis will never turn himself off.  Ever.  Some nights that will win games for the Pacers.  Other nights (like last night), they will lose because of it.  Have to accept the bad Ellis with the good Ellis.

1 – Monta does not need to be liked.  it goes deeper than that.  Monta not only doesn’t need to be liked, he seems to feel genuine indifference toward those in his path.  The Pacers needed an infusion of insensitivity on their roster, and Monta has plenty of it.  He’s willing to say what’s on his mind no matter the effect it has on others.  You don’t want 13 guys like that on a roster, but one can be a big help.