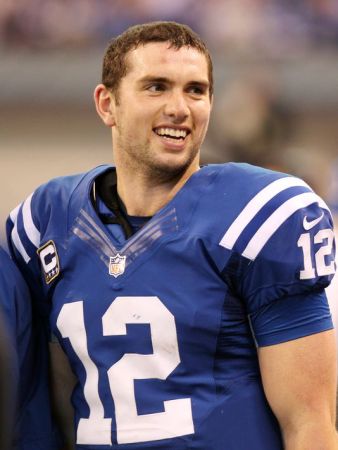 Job #1 for the Colts is to make sure Andrew Luck has reasons to smile this offseason.

Colts fans will be watching the NFL Draft Combine this weekend with keen interest as potential draftees sprint, lift, and answer idiotic questions. because the Horseshoes have holes – lots of holes.

First round misses in 2013 (Bjoern Werner), 2014 (1st round pick dealt for Trent Richardson), and 2015 (Phillip Dorsett – at least being judged by his 2015 contribution) have left the Colts with an old roster that requires immediate attention on both sides of the ball.

That means Colts GM Ryan Grigson and coach Chuck Pagano need to hit early and uncover gems late in the 2016 NFL Draft if the Colts are going to contend for a championship in 2016.

These are the 10 most important issues for the Colts to resolve between now and the NFL Draft:

10 – Frank Gore will be 33 on May 14.  I love Gore as a guy and running back, but the athletic skills needed to succeed as a running back seem to recede every week once they get to 32.  Gore had a mostly productive 2015, but at some point his love of football is going to be replaced by a longing for the same body he used to build a hall of fame caliber career.  The Colts need to find a second option who can do everything Gore can, but longer and faster.

9 – Ryan Grigson and Chuck Pagano need to affirm Jim Irsay’s faith.  It’s one thing to sit in an owner’s office and pledge to work together productively.  It’s another to do it.  Whatever differences that existed between Grigson and Pagano prior to that meeting in January that saved both their jobs, they better be resolved.  They don’t need to work in harmony like the Indigo Girls sing, but if they are going to stand on tables screaming at one another, the result better make the roster better.

8 – Specialists are set, but not much anywhere else.  It’s assumed Adam Vinatieri will return to kick, and Pat McAfee is under contract for another three seasons as a dynamic special teams weapon.  Matt Overton will return as long snapper too.  Other than Andrew Luck, Anthony Castonzo, and Vontae Davis, the Colts are looking for upgrades virtually everywhere else.

7 – Robert Mathis will be 35 in two days.  At 35, elite pass rushers are usually sitting on the couch trying to figure out what to do with the rest of their lives.  Mathis will trying to squeeze one more year out of his extreme athleticism and work ethic, and the Colts need exactly that.  Supposed speed rushers employed last year by the Colts to pressure the quarterback are going to be elsewhere – retired, suspended, or employed by another team.  Mathis and DE Kendall Langford tied for the team lead with seven sacks in 2015.  No one else tallied more than three.

6 – Andrew Luck is entering his prime.  Every year from 2016 forward that Luck is not surrounded by a championship caliber roster is a season wasted for a franchise that has been fortunate enough to draft or employ Johnny Unitas, Bert Jones, John Elway, Peyton Manning, and Luck.  Give that incredible glut of great QBs, the chances are good Luck will be the last until 2073.  Need to strike while the iron is hot, and that means pulling off a great draft that addresses immediate and longterm needs.

5 – Safeties are old.  No, Mike Adams has not yet been invited to join AARP, but he’s closer than he would like.  The list of productive non-QBs and kickers 35+ in the NFL was short – Julius Peppers, Charles Woodson, Antonio Gates, Steve Smith Jr., James Harrison, and Antonio Gates.  Adams would like to be among them in 2016, but the end of the road for Adams is quickly approaching.  Dwight Lowery is 30, and a free agent who may or may not return.  Fortunately, Clayton Geathers is entering his second year and appeared to be capable of playing reasonably well during his rookie campaign.

4 – Vontae Davis is a good corner, but who will be on the other side?  Free agent Greg Toler is likely a goner for the Colts, which means someone else will start opposite Davis as an extremely important press corner.  Toler was fragile and occasionally exposed by opposing receivers, but he might be the Colts most missed player in 2016.  Whether 2016 third round pick D’Joun Smith is ready to compete for a starting spot is one of the unknowns worth closely watching during training camp.

3 – Offensive line needs to keep Luck clean.  That likely means upgrades.  With the current group of offensive linemen, Luck ruptured a kidney, Matt Hasselbeck’s entire physical being was disrupted, and Charlie Whitehurst’s season ended.  Two of those weren’t the direct result of the line’s ability to protect, but no defense looks at the Colts line as a whole and shudders.  Upgrades are needed – and that’s plural – if Luck is going to survive 16 games in 2016.  There is another component to the result of not addressing the line – will Luck be enthusiastic to return to the Colts if upgrades are not made?  Irsay says he is going to pay Luck whatever it takes to keep him, but so will everyone else in the NFL who needs a QB – roughly 20 teams.  I’m sure Luck will consider the priority the Colts put on his health as he decides what’s next.

2 – Colts need to pressure the quarterback to win.  With Von Miller and DeMarcus Ware ravaging Cam Newton, the Denver Broncos won the Super Bowl.  Their 4.5 sacks and two forced fumble were the difference in a game defense dominated.  That is how important making a quarterback uncomfortable is.  The Colts weren’t able to get that done often enough last season.  Now fully recovered from his Achilles tear, Mathis might have another good season in him.  Other than Bob, the Colts outside linebacker corps lacks even a mediocre speed rusher.  They need one – or more – right now.

1 – Andrew Luck needs to be signed.  A long-term deal is in Luck’s future, but is it a done deal that he will be a Colt the next time he signs?  It may be, but Luck is smart enough to know that his comparative value will never be higher and his leverage huge to make the ask for what he feels is important.  Luck has the potential to be a once-in-a-generation guy.  Allowing him to even consider whether the grass might be greener would be ridiculous.