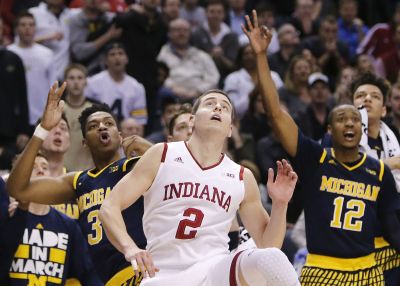 Another Big 10 Tournament, another weekend off.

That’s the way March has begun for the Hoosiers through the majority of these damnable events.  Indiana has never won this tournament, and only advanced to the finals once – 15 years ago.

Three times, including yesterday, Indiana has been eliminated because of a buzzer beater.  In 2002 it was former Hoosier Luke Recker, then Minnesota’s Blake Hoffarber in 2008, and yesterday it was little used Kameron Chatman burying his eighth three-pointer of the season over Nick Zeisloft.

Hoosiers fans enjoy the psychosis of believing March can bring pleasant results as it did in the 1970s and 1980s.  Telling them that the Hoosiers will celebrate the 30th anniversary of their last NCAA Tourney win next season brings incredulous stares and irate pronouncements of a need for regime change.  Let’s take a deep breath.

Let’s focus our attention on waiting for Selection Sunday for news of the path Indiana will need to traverse in its latest best chance to survive and advance – or crap out early.

There have been positive signs this season – a simplification of strategy, an acknowledgement by Tom Crean that less can be more, the leadership of Yogi Ferrell, and the emergence of OG Anunoby as a worker who understands basketball is more than an effort to impress NBA scouts.

But still there are IU boosters who await doom so they can fan the flames of discontent with enough ferocity that Tom Crean might be replaced by someone who can lead Indiana back to national relevance – a status they have not enjoyed other than the outlier season of 2002 – in a generation.

Since the beginning of the season, I’ve cautioned that awaiting the end of the season is required before casting judgement on Crean of this Indiana team.

Winning a second Big Ten regular season championship is a great accomplishment, just as losing to Wake Forest and UNLV in Maui was a miserable result.  But until we know what happens in the last chapter of this saga, making a determination as to what Indiana Basketball is after eight seasons under Crean is imprudent and premature.

According to both CBS Sports Jerry Palm and ESPN’s Joe Lunardi, Indiana will enter the NCAA Tourney as a four-seed, which means a team like Yale or Northern Iowa will be a first round opponent, and likely five-seeds like Iowa State or Arizona will stand between the Hoosiers and a Sweet Sixteen matchup with a #1 seed.

That was the importance of yesterday’s loss to Michigan – the placement in the grid a step farther from a top seeded favorite to win the whole damn thing.  That’s gone, but it doesn’t DQ IU from a chance to win the four games needed to punch its ticket to Houston for the Final Four.

Indiana athletic director Fred Glass often states the goal of the program is to compete regularly for Big Ten championships and be a program that can be expected to hang a sixth banner.  The Hoosiers won the most meaningful Big Ten championship last week, and are still in the game to succeed beginning next Thursday toward earning the second of Glass’s lofty goals.

This is a better Indiana team and a better version of Crean as a coach, so put away the well-earned cynicism and try to enjoy the madness.

We’re going to have eight months for a post-mortem examination of these Hoosiers, a look to the future, and a dissection of the reign of Tom Crean.  In the meantime – relax.

Regardless of yesterday’s debacle, Indiana still has a viable road to the glory fans feel is a birthright, but has been an elusive quarry since 1987.

3 thoughts on “Indiana Basketball – Now what for the Hoosiers – and their easily perturbed fans?”