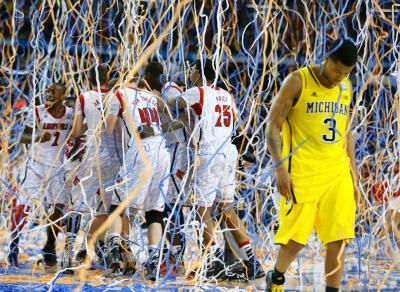 There is nothing like the NCAA Basketball Tournament.  It is totally unique in many ways, and it captivates America for 18 days as kids we have never heard of from universities many never knew existed earn a spot in our hearts for buzzer beating heroics.

March Madness is especially keen in Indiana and Kentucky where work stops at Noon on the Thursday the tourney begins in earnest as bars fill with fans of the Hoosiers, Wildcats, Boilermakers, Cardinals, Bulldogs, and Fighting Irish.

Win – move on to the next round.  Lose – go home.  For the seniors, they go home for good.  Hope exists for 64 teams on Thursday, and by the end of play Sunday 48 have exited.  Sixteen survive.  The next weekend, the field is pared down to the Final Four.

The NCAA Tournament is unforgiving and relentless, and because of that it is the greatest sporting event on the calendar.

Here are the 10 best things about the NCAA Tournament:

10 – There are as many teams to root against as root for.  People in Indiana hate Kentucky almost as much as they love IU, Purdue, and Butler.  Boilermaker fans hate the Hoosiers.  People in Missouri hate Kansas.  Cincinnati hates Xavier and vice versa.  Everybody both admires and hates Duke.  Rooting against a team of 18-22 kids you have never met might seem irrational, but anyone who has spent time tweeting with Big Blue Nation knows rationality flies out the window for college hoops fans.

9 – The little guys can wreck it for the big-time coaches.  Lehigh, Florida Gulf Coast, Butler, George Mason, VCU and other teams have emerged as March Cinderellas through their upsets of big time programs.  They prove to us that anything can happen – that the seemingly impossible is somehow possible.  Steve Enfield and Shaka Smart can out wit Coach K and Tom Izzo on a given day.  Most of us are underdogs in life, and we identify with those poorly funded understaffed operations that end the season for big timers.

7 – More teams in it than any entire pro sports league.  If you include the play-in games, there are 68 teams with a chance to win this tournament when play begins.  The NFL has 32 teams – total.  MLB and the NBA have 30 each.  Can you imagine how thrilling it would be if the NBA played a one-and-done tournament with every team for two weeks at the end of the season rather than the two-month marathon of best-of-seven series?  The country would shut down.  The NFL comes close, but the NCAA Tournament is the closest thing to a full-on sports orgy as there is.

6 – Sometimes St. Patrick’s Day and the first round sync.  This year is one of the few where St. Patrick’s Day and opening day of the NCAA Tourney coincide.  The result is truly March Madness.  Bars are full of irishmen for a day and college hoops fans for life.  It’s bedlam, and there is no better bar day on the calendar.  Sad it only comes around every seven years or so.

5 – Players aren’t in it for the cash.  The players aren’t mini-corporations – yet.  Winning is their chief concern, not branding.  They care more about teammates than their agents.  March Madness is sport for the sake of sport, and that makes the celebrations after the inevitable upsets all the more euphoric.

4 – CBS can’t shove a narrative down our throats.  We get to discover our own reason to care about teams without the network pre-determining it.  There is nothing the media enjoys more than telling us what is going to happen before an event takes place.  Building a bond between viewers and the obvious choice as the most special participant is Broadcasting 101.  In the NCAA Tournament, there are roughly 1,000 players who will have a chance to do something special.  That forces CBS and Turner to watch along with us to see what happens.  We get to discover the magic together.

3 – Now, we get to toggle.  Back in the day, every NCAA Tournament game was televised on CBS, but there was only one CBS affiliate in every city.  Watching one game at a time is not the way March Madness on the opening weekend is best consumed.  Prior to the multicasts, we relied on the dunderheads at CBS to toggle between games so we wouldn’t miss important action.  Since the proliferation of games a few years ago on TruTV, TNT, TBS, as well as CBS, we toggle for ourselves.  That means no more prattling by the studio host when there is another game being played.

1 – Watching is a participation event for millions.  Who doesn’t fill out a bracket?  In Indiana and Kentucky, children, seniors, and everyone in between play expert and then spends the next couple of weeks talking about how close they were to winning whatever bracket challenge they enter.  Because of brackets, every game holds the promise of validation.  Grandmothers, fifth graders, people who watch college hoops for a living, and people who only watch during March – they all have a chance to get it right.