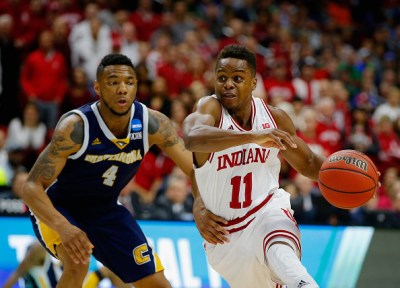 Yogi Ferrell posted his first 20/10 game at a good time for the Hoosiers who will play Kentucky tomorrow.

Indiana and Butler live, and Purdue’s dead.  But day one of the NCAA Tournament was about more than results of local teams.

There were upsets, reasons to feel good, moments of grace, life lessons, validation, local victories and defeats, some really good basketball, and other games that were difficult to watch (sorry, Stony Brook, but the ability to shoot is important).

The least predictable nationally televised competitive event in America delivered on that promise yesterday – and then some.

Locally, for Indiana and Butler, another game looms.  For Purdue, the season ended in a very painful way.

Here are the top 10 moments of bliss, grief, validation, and wonder from 13 hours of nonstop hoops action:

10 – Yale vs. Baylor was a validation of all that’s good and pure.  For the first time since 1962, Yale qualified for a spot in the NCAA Tournament as the representative of the Ivy League, a conference that doesn’t offer athletic scholarships.  The Bulldogs were matched up against Baylor, a program whose recruiting practices are described privately by those in college basketball as “aggressive”.  For Yale to advance over the top of Baylor yesterday provided a wonderfully poetic moment for those who celebrate amateurism in college sports.

9 – The fanbases of Indiana and Purdue are different.  Not saying one is better than the other, but if Indiana had lost in the same way as Purdue did yesterday after being up 13 with less than four minutes left, Hoosier fans would have marched on Assembly Hall demanding Tom Crean’s head on a spit.  Matt Painter will return unfettered to Mackey Arena today as work begins for next season.

8 – Dick Vitale is a wing nut.  Vitale has so thoroughly attached himself to college basketball that many believe him to be part of the fabric of the game, instead of the seemingly unremovable dust bunny he is.  Yesterday, the cloyingly effervescent Vitale shared two rules he believes would fix the selection committee’s process in anointing at-large teams to the tourney.  He said only teams with winning conference records should be eligible for selection.  The other rule is that only teams finishing in the upper third of their conferences should be eligible because the event needs more low to mid majors.  Idiocy.  Forget that fact that enacting rule #2 would render #1 unnecessary.  If teams from major conferences outside the upper third of their leagues were excluded, this year’s bracket would lose 16 teams – that’s a full 25% of the teams still around yesterday morning.  Who would replace them?  Monmouth and umm, well, uh…

7 – OG Anunoby reminds me of…oh, I don’t even want to say it.  In 2010, Tom Crean introduced a recruiting class of two to Indiana fans.  Both were unheralded, lightly offered, and considered long shots to contribute to a big winner.  Less than three years later, one of those guys was the second selection of the 2013 NBA Draft.  He was all business as a Hoosier, working to develop his body and game during three years in Bloomington.  Anunoby arrived nine months ago lightly recruited, and a long shot.  Yesterday, Anunoby scored 14 points and notched two steals in 15 minutes of play.  So far, so Vic.

6 – None of us will ever – EVER – complete a perfect bracket.  The odds of filling out a bracket without an error if you can pick games at a 60% correct rate are 9,400,000,000,000-to-one.  That means if every person on Earth completed 14 brackets, the odds would be that a correct bracket comes along every 94 years.  Good luck!

5 – Charles Barkley is the Kramer of college hoops coverage.  On Seinfeld, Kramer was always funny and wrong.  His assumptions were energetic, but ludicrous.  Barkley seems to know nothing about college basketball, but that doesn’t keep CBS/Turner from asking him to opine about games in the hopes he says something outrageous.  Enlightening and informational is not in Barkley’s arsenal, but that doesn’t keep him from being a star through his entertain silliness.

4 – Butler will find a way if given an opening.  Texas Tech had its chance yesterday.  Up 21-14 midway through the first half, the Red Raiders had several offensive possessions to push their advantage.  They didn’t hit shots, Butler blocked out, and they rode out the storm.  Once shots started falling, Butler took control and won.  If Virginia wants to beat Butler tomorrow (7:10p TBS), they are going to have to walk through the door when (if) it opens in the way Texas Tech was unable to.

3 – Purdue fans are increasingly agitated.  High expectations lead to big disappointment, and the presumption of a long March led Boilermaker fans to euphoria as Purdue built a 13-point lead with 3:33 left yesterday against Arkansas-Little Rock.  The undermanned ALR team kept scrapping, and Purdue got tight through the rest of regulation and two overtimes as they lost.  This early exit is the latest in a 35-year run of failures to reach the Final Four.  Purdue fans want better, and patience is growing short (but still not approaching that of Indiana fans).

2 – The Pac-12 sucks.  I told you before this tournament that the Pac-12 is always over-seeded in the NCAA Tournament.  It’s been almost a decade since a Pac-12 team made it to the Final Four (UCLA in 2008) and almost 20 since a conference team won a championship (Arizona in 1997).  Pac-12 teams went 0-3 yesterday as Colorado, USC, and Arizona bowed out.  Pac-12 honks screeched about the under-seeding of Arizona as a six.  Yeah, not so much.  Wichita State bludgeoned the Wildcats last night as coach Sean Miller had a case of the flop sweats that had physicians watching on TV concerned for his health.

1 – Indiana vs. Kentucky is what fans wanted, and now they get it.  Kentucky coach John Calipari gets haughty about playing non-conference games on opposing campuses, so UK discontinued the home & home series against Indiana.  Indiana athletic director Fred Glass wants to provide some solid opponents at Assembly Hall prior to the Big Ten season, so he holds firm with UK in his demand to keep the game’s rotation between Lexington and Bloomington.  The result is on ongoing suspension of the formerly annual series between the rivals.  The NCAA Tournament Selection Committee took matters into their own hands in bracketing IU and UK as potential second round opponents.  That game will be played Saturday at 5:15p, and like the Yale vs. Baylor game – it will be good versus evil all over again.