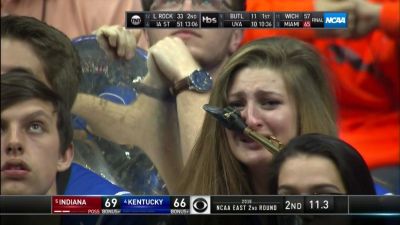 The weeping sax player is the lasting image of Indiana’s defeat of Kentucky in the round of 32 yesterday.

Two things happened simultaneously yesterday that Indiana basketball fans love.  The Hoosiers won to move on to the Sweet Sixteen, and Kentucky lost to end its season.

There will be plenty of time later to talk about the challenge of competing against top-seeded North Carolina Friday night in Philadelphia.  Today is a time for reveling in yesterday’s success.

I could write a book about everything that made Indiana beating Kentucky great, but because you and I are both too busy looking forward to next weekend, I’ll keep it to a short and sweet top 10 reasons yesterday was glorious:

10 – Ashley Judd silenced for another year.  I’m not sure how the 47 year-old former actress, best known for her ability to arch an eyebrow to express every emotion, became the representative Kentucky fan for TV networks.  We’re also not certain Kentucky fans aren’t as annoyed by her constant enthusiastic yammering about the Wildcats as we are, but it sure is nice to know crowd shots with Judd will be gone from my living room for the next eight months.

9 – OG Anunoby is now seen by America in the same way he is in Indiana.  Anunoby is a difference maker no one saw coming.  His commitment was lightly covered in the media (we had both he and his high school coach on my show, but that’s what we do), and he was seen as a project.  He has shown himself as a business-first force who can change a game with his intellect, athleticism, and length.  His three blocks against Kentucky were huge.  He reminds me as a quieter and taller version of Victor Oladipo.

8 – Yogi Ferrell tops Tyler Ulis head-to-head.  There are a lot of ways to compare two players at the same position, especially point guard.  There are tangibles like points, assists, and turnovers, and intangibles like leadership and a sense of calm amid turmoil.  Ulis outscored Ferrell 27 to 18, but Ulis jacked up seven more shots.  Ferrell led in assists four to three and in rebounds – five-zip.  Ulis turned it over four times to Ferrell’s one.  As for the intangibles, those are best weighed by the result of the game.  Indiana won by six.  Advantage Yogi.  Ulis is an elite point guard on both ends, but yesterday Ferrell was better.

7 – Sweet 16 is in Philadelphia.  In both 1976 and 1981, Indiana won national championships in the City of Brotherly Love.  The 1981 championship came at the expense of North Carolina – Indiana’s first opponent Friday in the regional finals.  It’s hard to argue that success 35 and 40 years ago is meaningful to 18-22 year olds, but it doesn’t hurt.

6 – Indiana earns another shot at a blue blood.  Indiana tries to sell its brand as a relevant basketball program rather than a historical footnote, and after beating Kentucky, the Hoosiers get another shot at one of the great programs in the history of college hoops that has managed to keep it rolling.  The path to consistent excellence runs through and over the top of Kentucky, North Carolina, Kansas, Michigan State, and Duke.  One down.

5 – The Big Ten vs. the SEC – not even close.  The SEC got three teams into the the 2016 NCAA Tournament.  Vanderbilt crapped out in a play-in game.  Kentucky was sent packing by Indiana.  Texas A&M lives.  The Big Ten hasn’t been a bastion of magnificence either with Michigan State, Michigan, Purdue, and Iowa sent home.  Kentucky was the SEC’s great hope, and yesterday’s loss means the Aggies of A&M are it.  Hey, at least neither the Big Ten or SEC has matched the ineptitude of the vastly overrated Pac-12.

4 – Nothing like ruining the day for Big Blue Nation.  There are a few sane Kentucky fans who express their passion for the Wildcats without hideous vitriol, but they are out shrieked by the lunkheads who attack anyone with a non-blue-centric vision of the world.  They are haughty in the extreme on social media, and having Indiana shut them up is a delightful sidebar to the Hoosiers win.

3 – Yogi Ferrell’s career at Indiana lives for yet another week.  Yogi is not the best point guard in the history of Indiana University.  That designation belongs to Isiah Thomas, who is one of the best in the history of the game.  But Yogi is really good, and it has been a joy to see him develop as a highly touted high school player at Park Tudor into the leader he is today.  One of Tom Crean’s best pieces of coaching is embodied in the evolution of Yogi from a gifted but immature freshman to the player and young man he is today.

2 – John Calipari shown the door.  There is nothing more satisfying than to see hubris crumble, and no one in college basketball defines hubris like Cal.  He speaks and acts like a guy who expects the world to genuflect each time he deigns to appear before them.  It’s an obnoxious act that makes a loss by UK as all the more enjoyable.

1 – Tom Crean out-coached John Calipari.  I was not a huge proponent of the players on the floor for Indiana during the final minute of the game, but I was even less impressed by Calipari choosing to slow his offense during the final 10 minutes.  Thomas Bryant validated Crean’s trust  by knocking down three free throws late as well as guarding the pick and roll much better than earlier in the year, and Indiana found a way not to turn the ball over despite Troy Williams being on the floor.  Despite losing Robert Johnson and Juwan Morgan to injury during the game, Indiana continued to find a way to handle Kentucky.  Calipari made it easier by slowing the pace.  Crean wins that battle.