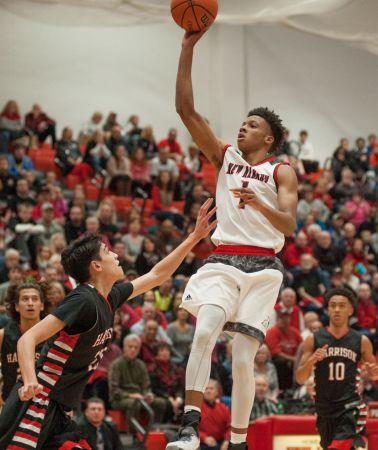 Can Romeo Langford be the best ever? That’s a question will ask beginning this weekend. It’s up to Romeo to answer it for the next two years.

This is a huge weekend of basketball in Indiana.  Both Notre Dame and Indiana will play Sweet Sixteen (and perhaps Elite Eight) games.  The Pacers are on the precipice of earning a playoff berth (or dropping out of the race).  The high school state basketball championships may feature the coming out party for a sophomore who may be among the best who have played by the time he finishes his high school career.

Some questions will prompt more questions, but answers will also avail themselves for us to enjoy.

The questions will be answered starting tonight at Lafayette Jefferson High School as Griffith and Marion play the semi-state that needed to be rescheduled because of the horrifying bus crash Saturday morning that miraculously resulted in only minor injuries to the Griffith team.

Here are eight of those pressing questions:

8 – Can Robert Johnson’s ankle hold up for 40 minutes against the nation’s best team?  Indiana will need everyone at his best to compete successfully with the favorite in the NCAA Tournament, and that means it would be a boon to the Hoosiers’ hopes if Johnson can go.  Defending the North Carolina guards is going to be a tough job, and the fivesome Tom Crean deployed prior to the under-eight timeout against Kentucky might not have the same good fortune against the Tar Heels.

7 – Will Notre Dame be the state’s last NCAA Tournament survivor for second straight year?  There was a time when Mike Brey’s seat as the head coach at Notre Dame warmed after a run of good basketball left Fighting Irish fans to wonder if that was all Brey was capable of providing.  In his first 13 years, Brey led Notre Dame to one Sweet Sixteen, and lost 10+ games 10 times.  His 14th season brought a losing record and no trip to a postseason tourney to South Bend.  The last two years have been much better with an Elite Eight followed by a Sweet Sixteen that could become a Final Four, which shows an old dog can learn new tricks.

6 – Will New Albany win its first state championship since 1973?  There are very few places in Indiana where high school basketball is a source of more fervent conversation than New Albany, a town across the Ohio River from Louisville.  It has won a single glorious state championship, and has been to Indy three times since to compete for a crown.  With the singularly splendid Romeo Langford leading the way, the Bulldogs are just 32 minutes away from a second state title.

5 – Can Griffith rebound from bus crash to win state championship?  The scene at the crash of Griffith High School’s team bus was grisly (not grizzly – like the bear – as I originally spelled it).  That no one died is a miracle.  That Griffith might be able to win a state championship a week later is unfathomable.  Tonight, Griffith will play the semi-state game it missed as the result of the bus crash.  If they beat Marion, a state championship game will be their reward Saturday night.

4 – Is Caleb Swanigan ready for the NBA?  Purdue fans would love to see Swanigan return for a second year with the Boilermakers, but a weak draft might allow Swanigan to become a millionaire before his time.  Scouts are currently convinced Swanigan needs at least another year to allow his game to mature.  That might change after workouts for NBA general managers.

3 – Are the Pacers a playoff team?  Only 1/2 game separates the Pacers from being on the outside of the Eastern Conference playoff picture.  If they cannot take advantage of the upcoming spate of  games against lesser competition, the Pacers could take a step backwards toward unexpected mediocrity.  If they run the table against the next seven opponents, they have a chance to launch themselves into a spot where home court advantage in the first round could be the result.

2 – Can Romeo Langford become the best Indiana high school player that ever was?  New Albany’s Langford is a sophomore, so I felt a little silly watching him in December and leaving the gym believing he was the best high school player I had ever seen.  The Bulldogs lost that game to Pike – their only loss of the season – so it was doubly nutty to make a pronouncement like that.  I went to see him again at Carmel, and asked longtime New Albany fans whether he was the best they had seen.  All pondered for a few seconds and then nodded that he was.  I still needed to see more.  This time I brought my wife to New Albany to see the Bulldogs play Jeffersonville.  She was sure too.  Langford is generous, modest, athletic, instinctive, and skilled.  He is great at everything – EVERYTHING.  See for yourself as New Albany plays McCutcheon this Saturday night.  Make your own decision.

1 – Can Indiana post its most important win since 2002?  It’s been 14 years since Tom Coverdale, Jared Jeffries, and Dane Fife led the Hoosiers to the Elite Eight and then the National Championship game.  Tom Crean has managed two trips to the Sweet Sixteen during his previous seven seasons at Indiana.  If Indiana can beat North Carolina on the heels of vanquishing the underachievers from Kentucky, Crean will break the glass ceiling which should allow fans to achieve yet another level level of comfort in his continued leadership in Bloomington.  IU will be the underdogs, but that’s nothing new for IU or Crean.