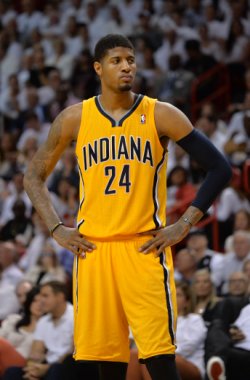 Indianapolis Star columnist Gregg Doyel came on my radio show and said something many thought was crazy – that Paul George should have been dealt at the trade deadline six weeks ago..

When he said it, I didn’t think he was crazy.  I thought he was seeing the Pacers as a good general manager would – as a collection of assets that combine to achieve a specific result.

If that combination of assets doesn’t cause the desired result, who can be untouchable?

The Pacers would like to win an NBA championship, and every player needs to viewed through the “Can (insert player’s name here) help the Pacers win a title?” prism.

Doyel understands that, and the fans who lost their minds all over his Twitter feed are allowing their personal feelings for George cloud the clarity necessary to build a championship team.  That’s understandable.  George is a good guy.

In an effort to help clear the waters, and build a bridge between Doyel and the rabid Pacers/Paul George fans who dumped on him, here are the nine reasons the Pacers should absolutely consider trading George and every other player on the current roster:

9 – Pacers waited to ship out Danny Granger.  Buy low, sell high is how investors make money, and with Granger the Pacers got it half right.  They waited too long to get a meaningful return for the former all-star drafted just 10 years ago.  Evan Turner left as soon as the season ended, and Lavoy Allen is still with the team.  Let’s hope a trade of George will bring back more than Allen (no offense to him – Lavoy is a nice player).

8 – Last weekend’s games.  The Pacers led both the Philadelphia 76ers and New York Knicks by 18 in the 3rd quarter, and almost lost both games.  Those two opponents are a combined 40-115 this season, and the Knicks played without Carmelo Anthony and Kristaps Porzingis – their two best players.  With George, the Pacers saw both leads evaporate in what was nearly the most disappointing weekend in franchise history.

7 – No championships yet.  There is only one way to prove worth as a champion, and that is to become one.  Hasn’t happened yet for George, and despite being healthy throughout the entire 2015-2016 season, the Pacers are still only a few games over .500.

6 – Value for George will never be higher.  Having proven that he can play an entire season after the catastrophic leg injury suffered while scrimmaging with USA Basketball almost two years ago, George still has upside.  He’s under contract for the next two years with a player’s option in 2018-2019 at a reasonable salary (given the exploding cap number next season).  If Bird can get a solid return in players and picks, it would be silly not to listen to offers.

5 – Paul excels as a brand manager.  The nickname, clothing line, hugs only for the opposing team’s best players, and other contrivances that show a keen eye for media exposure show him as a shrewd businessman.  There is nothing wrong with that.  It’s always a little more awkward when building a brand comes prior to championships, but George is attacking that realm of being a pro with gusto.

4 – Not enthusiastic about moving to the four as the Pacers go small.  Pacers president of basketball ops Larry Bird wants to go small like the Golden State Warriors, and that requires George to slide from the wing to power forward.  To this point, he has not be a willing participant in that plan.  C.J. Miles moved to the four early in the season, and got the hell beat out of him.  That might have validated George’s intractable resistance in making that change.  if the Pacers are going to go small, a more athletic four will have to be acquired.

3 – He’s more Pippen than Jordan.  Maybe there will be another Michael Jordan in our lifetimes, but that combination of assassin and physical freak doesn’t come along very often.  LeBron James doesn’t measure up to MJ, so it’s no shame that George doesn’t.  The question is – how many championships would Pippen have won without Michael?  The answer is zero.  Now, if the Pacers can find an alpha male to pair with George, that is a different construct that could bring a bunch of banners to Indy.  How many championships would the Bulls of the 1990s have won without Pippen?  That’s probably a better question regarding George’s potential impact on Pacers basketball.

2 – Paul is a really nice guy.  “Nice guys finish last” is a Leo Durocher quote that is right about half the time.  Steph Curry is a nice guy.  Tim Duncan is a nice guy.  Steve Young is a nice guy.  Peyton Manning is a nice guy.  Nice guys can lead teams to championships, but killers are more likely to do it.  Kobe Bryant, Isiah Thomas, Jordan, Bird, Kareem Abdul-Jabbar, and Magic Johnson all have their moments as nice guys off the court, but were win-first-and-only competitors on it.

1 – 41-36.  The Pacers have enjoyed relatively good health this season, and with five games left in the season are still not assured of making the playoffs.  George has played in every game, and while thinking about where they would be without him, the reality with him has not been satisfactory if the goal is to win a championship.

The question of whether the Pacers should trade George does not elicit a solid yes or no answer.  Like any business deal, without knowing what the company on the other side of the table is offering, no answer is possible in either direction.

That I could only come up with nine reasons that George might be traded speaks highly of his value, but to declare George untouchable is as silly as claiming he must be dealt.

Whether George should be traded is entirely dependent upon what comes back in return.