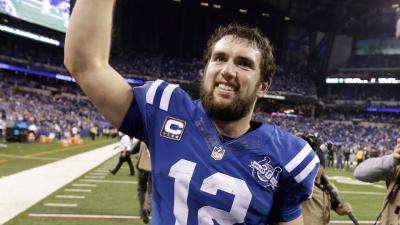 Andrew Luck’s health is the biggest reason for fan optimism heading into the 2016 season.

These are interesting times for Indiana sports fans.  Mediocrity is everywhere, but all that may be about to change.

Professional teams boast potentially transcendent talent that are capable of championship level play, and the college football and basketball teams are arching toward meaningful improvement.

I’m normally a cynical critic of management and mediocrity, but there is an upside for virtually every local team to make a significant jump forward during the next 12 months.  A new golden age of sports in Indiana might be just months away.

Much like competitors can push one another toward hard work and excellent, so can teams fighting for allegiance from the same fanbase, and that might be a process that blossoms through the rest of this year and into 2017.

Here are the 10 reasons Indiana sports fans might be on the brink of prolonged glee:

10 – Indiana Football is coming off a bowl.  It’s not lost on anyone that the last time Indiana went to a bowl ended one decade-long drought and began another, but this feels different.  There is a new normal in Bloomington that allows for a level of optimism that is both aggressive and justifiable.  As the program has slowly but steadily improved under Kevin Wilson’s leadership, enthusiasm for IU football has stopped being perceived as weird.  The middle of the Big Ten is now a reasonable expectation instead of a psychotic delusion.

9 – Tom Crean has evolved into a saner version of himself.  For seven years, it seemed like Crean was trying to prove his worth as the basketball coach at Indiana University.  Then, something happened in 2016 that allowed Crean to act like he already had the job.  The preening and posing softened, and the quirky tics mostly vanished.  Yogi Ferrell addressed the team during timeouts, and the Hoosiers suddenly played more confidently.  Given the talent he will have to work with, a confident Crean might be able to coax a special March out of the Hoosiers.

8 – Purdue football can’t get worse.  In three seasons running the Boilermakers, Darrell Hazell has crafted a 6-30 record with as many wins against Indiana State as Big Ten opponents (2).  There is nowhere to go but up.  Hazell was 11-3 in his last year at Kent State, so we know he isn’t a terrible coach.  Purdue isn’t likely to jump into bowl contention, but four wins is a reasonable projection as Hazell coaches for his job.

7 – Colts mediocrity in 2015 forced recalibration.  Failure brings humility, and greatness is attainable when humble.  Hopefully, the 8-8 train wreck the Colts authored in 2015 after being touted as a Super Bowl favorite has wiped the hubris from the Horseshoe.

6 – Paul George is entering his prime.  On May 2, George will turn 26.  That age marks the point of origin for an NBA player’s best years.  After averaging 23.4 points per game, 7.1 boards, and four assists per game this season, George is either on the precipice of stardom or at the apex of his ability to contribute.  If this is a launching point for George, the Pacers could go into next year looking to crack the top four of the Eastern Conference.  if the Pacers 1-7 record in overtime game was reversed, they would currently be 48-30 – good enough for third place.  A slightly improved George should be worth the single point per game to get that done.

5 – Ryan Grigson is less likely to outsmart himself.  The rap on Grigson within NFL circles is that he’s arrogant.  At least he was before the 8-8 record that kept the Colts out of the playoffs for the first time since he took the GM gig in 2012.  “Listen to the board” was his mantra last year as he selected wide receiver Phillip Dorsett in the first round of the 2015 NFL Draft.  He repeated similar claptrap prior to wasting the 2013 first rounder on Bjoern Werner and trading the 2014 first round pick for Trent Richardson.  We are more likely to hear about how important it is to protect Luck and attack opposing QBs prior to this draft than high-minded cocksure wisdom.  Almost losing your job has a way of bringing a man toward making reasonable decisions.  Doing what you should is almost always a better idea than doing what you believe is brilliant.  After 2015, Grigson no longer feels brilliant.

4 – Kelon Martin is set to explode.  The Butler Bulldogs will lose Kellen Dunham and Roosevelt Jones to graduation, and that will bring out the doubters as Big East standings are predicted for 2017.  There is no doubt those two players were splendid competitors during a time of unprecedented growth for the program as it jumped from the Horizon League to the A-10 to the Big East.  If you want to predict a backslide for the Dogs, go right ahead.  I believe they will take a step forward due to the continued evolution of Kelon Martin – as talented a player as has ever played at Hinkle Fieldhouse.

3 – The Hoosiers might be 10-deep with four-plus starters back.  Yogi Ferrell, Nick Zeisloft, Max Bielfeldt, and Ryan Burton are gone from a roster that brought Indiana at Big Ten best 15-3 record before being eliminated in the Sweet Sixteen by North Carolina.  Back from injury will be James Blackmon Jr. and Robert Johnson.  If Troy Williams and OG Anunoby return as Thomas Bryant has pledged to, all the better!  Joining the Hoosiers will be point guard Josh Newkirk, freshmen Curtis Jones and De’Ron Davis.  JuCo big Freddie McSwain might also join the party at Assembly Hall.  If anything, Indiana should be deeper and more talented.  March could be fun for Indiana fans for the first time in 15 years.  Don’t book tickets for Phoenix yet, but this should be Crean’s best group.

2 – Myles Turner has only scratched the surface.  Just 20 years old and two years removed from competing against high schoolers, Myles Turner has shown coaches, teammates, and fans the potential that made him the steal of the 2015 NBA Draft.  Pacers assistant Dan Burke told me his ceiling is limitless, and that he will be a winner and an all-star.  The flood of cash into the NBA this offseason will bring greater parity, but the Pacers control the key components of their roster.  Another year of maturity for Turner should help the Pacers take a significant leap forward.

1 – Andrew Luck is healthy.  Other than a dominant starting pitcher in baseball, no player can have as positive an effect on his team’s fortunes than an NFL quarterback.  Luck’s variety of injuries in 2015 (including a lacerated kidney) cost the Colts any opportunity at making the playoffs, but his return should prompt exactly the opposite.  If Grigson makes protecting Luck a priority (can you imagine him not?), and Luck stays healthy in his fifth pro season, the Colts could enter an era similar to that enjoyed by predecessor Peyton Manning from year five through the end of his Colts tenure (2002-2010) – as good a nine-year run as any NFL team has ever produced.