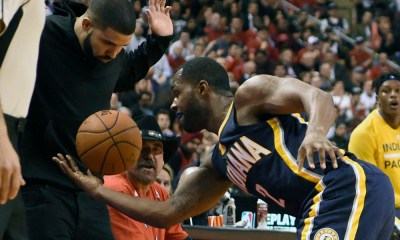 In this moment that best represents the Pacers collapse last night, the closest defender to Rodney Stuckey as he turned the ball over was Drake.

What a miserable game.  The Pacers appeared unready and incapable to claim a stranglehold in their opening round matchup against the Toronto Raptors.

As the fourth quarter began, the Pacers held a commanding 13-point lead, and Paul George was showing himself to be the best player in the series.

An incredible 9:30 elapsed in that final period that brought only two points for the Pacers.  That extended period of ineptitude was too much for the Pacers to overcome, and now the Raptors have two chances to close out the series while the Pacers fight for their season.

Fans will use terms like heartless, inept, stupid, and pitiful to describe the level of play and coaching last night.

We’ll settle for these 10 explanations and reflections to describe last night’s debacle, and will remind you that the Pacers – while seemingly incapable of winning the series – are only two wins from making everyone forget about last night’s meltdown.

10 – CJ Miles picked a bad time to slump.  Whether due to injury or not, Miles has gone stone cold from beyond the arc, making only 2-of-16 from beyond the arc.  His points per game average has dropped from 11.8 in the regular season to 4.0 against the Raptors in this series.

9 – This was the worst loss in 28 years, according to Mark Boyle.  When the best radio play-by-play guy in the NBA tweets, “I would consider this the worst loss in my 28 seasons with the Pacers,” it means the loss will sting for a long time.  Not only was this loss painful, the postmortem will be just as unpleasant should the Pacers not rally to win games six and seven to advance.

8 – When you live in hope, you die in despair.  Frank Vogel saw the result of trusting his second unit with a big lead in the first half.  The lead virtually disappeared before the starters returned and rebuilt it to nine points at the half.  He did exactly the same thing as the fourth quarter began and seemed surprised by the same result.  This time, the starters couldn’t save the Pacers bacon as they lost by three.  Vogel hoped the result would be different, but should have pivoted to a different strategy.

7 – Paul George’s 39 points on 19 shots are wasted.  During the 41 minutes George was on the floor, the Pacers outscored the Raptors by 15.  While he was on the bench for all of seven minutes, the Pacers gave up 18 more than they scored.  That ineptitude by the second unit was a surprise given their reputation as an area of strength for the Pacers.  By the way, that reputation has been discarded by fans who will view the bench as a serious concern during the offseason if the Pacers are unable to rally.

6 – The Raptors tried to give the series away, but the Pacers refused delivery.  A team known for choking in the playoffs showed up tight last night, ready to crap the bed and hand the Pacers a chance to close the series game six, but the Pacers out-choked the Raptors by scoring only nine points in an obviously pivotal game five, (in a series tied at two, the winner of game five wins the series 82% of the time).

5 – Monta Ellis can win games, but he can lose them too.  The turnover on what should have been a simple pass to George late in the game last night was a great example of the kind of brain fart that stains an otherwise outstanding basketball resume’ for the mercurial Ellis.  Sometimes winning requires a lack of losing plays.  While Ellis is capable of knocking down tough shots when the offense bogs down, he is also the master of turning an easy play into a costly bucket on the other end.

4 – Rodney Stuckey was not emotionally prepared to compete.  Blaming one guy for a loss is ridiculous, but Stuckey was as bad as he can be.  He made only one of 10 shots, and his fourth quarter turnover where he simply lost control of the ball immediately in front of Drake was endemic of the Pacers major problems down the stretch.

3 – A great postseason by Paul George is likely to be wasted.  George is averaging 28.8 points, six rebounds, and almost five assists per game.  Those are Jordan-esque numbers for a player entering a prime delayed by that horrific injury at the USA Basketball workout in Las Vegas almost two years ago.  George is doing all he can, but those who compete while he rests were awful last night.  Just as the Colts need to strike while Andrew Luck is hot, the Pacers need to find a way to succeed while George re-loads for a stretch run in these games.

2 – Two points in 9:30.  Pacers fans remember fondly Reggie Miller’s eight points in nine seconds against John Starks and the New York Knicks in the 1995 playoffs, but would like to forget the one field goal made during the first nine-and-a-half minutes of last night’s fourth quarter.  Sadly, it will likely be remembered for all the wrong reasons.

1 – Overreacting to failure rarely brings success.  The time for this conversation won’t come until the postseason ends for the Pacers, but it bears mention that the Pacers met expectations this season.  Forty-five wins was in the sweet spot of predictions for the regular season, and only one seven seed has ever beaten a two-seed in a seven-game series, so the Pacers are who we thought they would be.  That said, the potential for more regular season wins was there, and the Raptors did everything they could to lose this series last night.  Was Vogel at fault for employing a rigid rotation in the fourth quarter?  Yes.  Was the bench terrible?  Yes.  Have there been talent acquisition and retention failures?  Yes.  While it’s true good is the enemy of great, it’s also true that good is the enemy of mediocre and terrible.

Take a deep breath, and get yourself ready for game six.  The evaluation of the brain trust can wait.