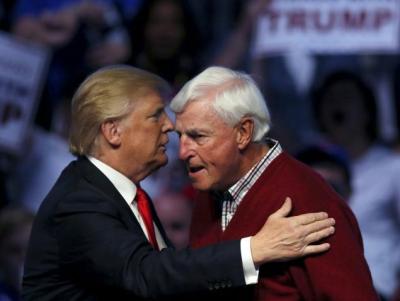 Bob Knight inspired no anger nor glee – just sadness during his endorsement of Donald Trump yesterday.

Former Indiana basketball coach Bob Knight opened for Donald Trump at a campaign rally last night in Indianapolis, and the result wasn’t the shock and awe hilarity that used to be Knight’s standard fare.

Instead, the monologue was strange, rambling, self-serving, and sad.  One of the greatest basketball coaches in history has been reduced to a toothless dancing bear sideshow with all of the growl, but none of the bite for which he was known.

Getting old will or has happened to us all, and many gracefully exit the public stage before the spectacle becomes pathetic.  Sadly, Knight has now entered the embarrassing stage of public life, and as I watched, it –  surprisingly – made me sad.

I love the Knight of the 1980s – brash, unapologetic, demanding, funny, and the architect of outstanding basketball teams.  The Knight of the 2000s was eerily reminiscent of the earlier version, but this one – the guy trying in vain to crack a whip that has no tail – brought only a hollow echo of the thunderous bluster that once made him the most polarizing figure in sports.

I cried no tears for Knight yesterday, but felt there should have been a few to mark the passing of a legendary presence.

Here are 10 reasons why tears would have been appropriate as Knight spoke:

10 – His preparation-free rants are no longer able to entertain.  For years, Knight would just show up, tell stories, yell at people, and collect a check from a gleeful event organizer.  His wit was razor sharp, and his indignant rants were legendary.  Yesterday, the lack of prep caused a verbally clumsy mess.

9 – Knight’s ability to motivate is gone.  There was a time when I saw Knight walking down the hall in IU’s Student Union, and I took a stairway rather than cross his path.  He was one of the most instantly intimidating people I had ever seen.  He was huge, took hulking strides, and looked eager to express anger toward any trespasser.  Those days are gone.  Knight is now like a World War II tank in a museum.  You can see only that it was once dangerous.

8 – Still uses profanity rather than content to draw cheers.  Not sure how many times Knight used the word “ass” during his nostalgic wanderings, but it was quite often.  Every time the crowd heard it, they responded with a cheer, as though the swearing was the opening bars of “Maybelline” played by an otherwise confused Chuck Berry.  It gave the crowd a reason to believe Knight was still Knight.

7 – Sounded old.  The growl was gone, replaced by a weaker voice that didn’t fit the event.  Knight sounding breathy betrayed his age, even if the long present white hair did not.

6 – Referred to Trump as best prepared candidate ever.  Trump is a lot of things – charismatic, famous, rich, and arrogant among them.  Well-prepared to be president, he is not.  A good case can be made that he is not even well-suited to be president.  He’s a guy used to sitting atop the pyramid calling the shots.  The chief of the executive branch of our government doesn’t enjoy anywhere close to the same latitude in leading as a business owner.

5 – Arrogance still in full flower.  What Knight lacked in coherence had no effect upon his arrogance.  Knight has always been a guy who spoke as though his version of the truth was the only one worth hearing.  That was still true yesterday despite the message being a baffling mess.

4 – Looked similar, but noise was different.  When Knight walked to the microphone, he evoked the same feeling of awe that he always transmitted as the emperor of Bloomington.  Then, the weaker voice bleated, and the performance level sagged.

3 – Story about the boy with long hair was bafflingly irrelevant.  I get that Knight believes a clever answer brings clarity, and that seemed to be the moral of the long-haired boy story, but what it had to do with Trump, the presidency, America, or the event escaped me.

2 – The kick at Navy Basketball was weak.  Knight asked the crowd how many of them served in the Navy.  The were some cheers, and Knight proceeded to tell them how eight of his Army teams of the 1960s “beat their ass!”  Again, there is an issue with the relevance, and the other small issue of respect for people who actually served in the military.  People who fought for America as members of the Navy in World War II, Korea, Vietnam, the Gulf War or any other military operation likely don’t give a damn whether Knight’s Army teams won or lost every game they played.  That Knight thinks they do is a pathetic hyperinflation of the importance of basketball in his life.

1 – Knight made very little sense.  The appearance of Knight in Indiana is enough for most to cheer.  He is still a polarizing icon here, but there used to be a philosophy or two he conveyed that stuck.  I still practice some of the lessons learned as I listened to Knight.  He made me a better dad by sharing his strong feelings about using the word “NO!”  He was right – no is a great word.  Yesterday came and went without any message that simple or profound.  It was just a quilt of random words that stitched together conveyed nothing.