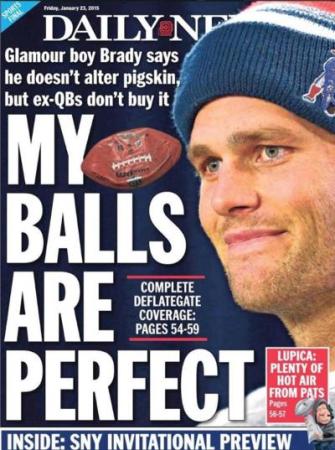 Some days I wish I lived in New York just for the headlines.

The 2nd U.S. Court of Appeals ruled yesterday that New England Patriots quarterback Tom Brady must serve the four-game suspension originally handed down by NFL Commissioner Roger Goodell for his role in deflating the footballs to be used by the Pats offense during the 2014 AFC Championship.

Of course, this was nothing but a procedural step, and will result in Brady exerting his right to further appeals so that he will be a former NFL quarterback by the time the legal process is exhausted and he is forced to serve his suspension.

At the very least, for a brief time, it seems that justice has been served in the Deflategate scandal – that bad deeds do have a consequence – even if the level of cheating perpetrated by the Patriots and Brady amounted to parking in a tow zone.

Here are the top nine reasons the Brady appeal being reversed is good for humanity:

9 – Destroying evidence must bring a consequence.  When we discuss Deflategate, sometimes we forget that Tom Brady destroyed his cellphone rather than allow an NFL emissary review the text messages that might have exonerated or damned him as a conspirator in the deflation of the game balls to be used by the Patriots offense.  The truth must be respected and revealed.

8 – Shows the folly of money as the ultimate goal in collective bargaining.  There are a bunch of considerations in crafting a collective bargaining agreement that extend beyond cash, but the NFLPA has never seen the wisdom of sacrificing a little moolah for needed changes in the NFL’s disciplinary system and the benefits extended to former players.  Maybe now they learn.

7 – it will show Tom Brady as a weasel determined to kick this can down the legal road until retirement.  Some guys know when the jig is up and punishment should be accepted for the common good.  Brady appears ready to continue to use all legal remedies to forestall his penalty, and that may push the suspension beyond Brady’s ability as an active NFL player to serve it.  His intractability is further evidence in the indifference he has for doing what is right if it means a competitive disadvantage for his Patriots.

6 – Validation of Bob Kravitz.  Bob needs validation like my digestive system needs another pizza, but he sure has taken a bunch of crap from Patriots fans since breaking the story on WTHR.com the morning after the game that caused the probe, hearings, and subsequent finding of guilt.

5 – Arrogant New England fans need a correction.  Patriots fans are among the most miserable in all of sport.  They believe winning is their right and the means of earning those wins is far less important than the result.  Either they believe the evidence of rampant cheating by the Patriots under Bill Belichick is the result of league-wide jealousy, or are complicit in their soulless pursuit of victory.  Either way, they deserve the penance the 2nd Court of Appeals reinstated yesterday.

4 – Tom Brady needs a little adversity.  My God, doesn’t the guy have a good enough life without needing to cheat to win a damn football game?  He has four Super Bowl championship rings, a stack of cash that his great grandchildren will never burn through, a supermodel wife who out-earns him, and a house with a moat.  Into every life a little rain must fall, and if this four-game suspension is the worst thing that happens to him, it’s a small drop on his back that will be gone very soon.

3 – Deflategate was the straw that broke the camel’s back.  Evaluated in isolation, the skullduggery that occurred prior to the 2014 AFC Championship Game was a parking violation.  It was the culture of abusing the letter of the rules and stretching every advantage possible over a 15-year period that resulted in the severe penalties against the Patriots and Brady.  The FBI got Al Capone for income tax violations.  Same thing.

2 – Patriots are an ends justify the means operation.  Winning at all costs always comes with a cost.  When fair play isn’t respected by a company or team, competitors who respect the rules get pissed off, and punishment is forthcoming.  Winning should justify a cultural position.  Winning solely for the joy of victory is a hollow pursuit the Patriots have engaged in since the arrival of Bill Belichick.

1 – The CBA gives Goodell the power to mete out exactly this level of punishment at his discretion.  If Patriots owner Bob Kraft doesn’t like the Brady suspension, he needs only to look in the mirror to find one of the culprits who caused it.  The most recent collective bargaining agreement between the NFL and the players union allows Goodell a wide berth in assessing punishment against players who are found to operate outside the best interests of the league.  Kraft was one of the negotiators at the table when the document was crafted.  If the union doesn’t like Goodell swinging a big stick, they should negotiate a different system of justice.