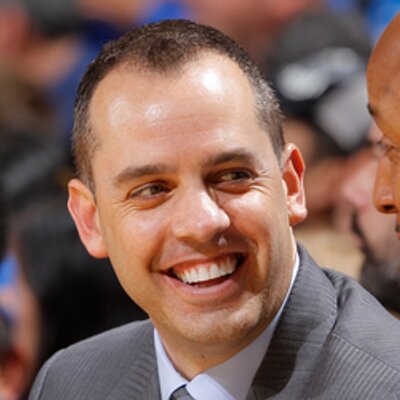 Frank Vogel likes to smile, and there might not be many opportunities to do that moving forward if he sticks around.

Frank Vogel likely doesn’t know at this moment whether he will invited to return as the coach of the Indiana Pacers (Larry Bird will hold a press conference tomorrow at 11a to talk about this and other topics), but that shouldn’t keep him from making the call on his own future.

Leaving the Pacers is Vogel’s only option even if team president Larry Bird begs him to return.

it’s a shame the end for Vogel has come this way.  He is a good NBA coach and a better guy, but coaching professional basketball is a brutal business where a roughly a quarter of the 30 gigs turnover every year.

No coach in the NBA history of the Pacers made it past four full seasons until Vogel did it 14 months ago.

For the Pacers coach with the most NBA games and wins, the time has come to pack a box whether the Pacers want him back or not.

Here are 10 reasons why:

10 – Vogel will never be Larry’s guy.  Jim O’Brien was Larry’s guy, and Vogel was on O’Brien’s staff.  When O’Brien was fired, the interim gig went to Vogel, and the Pacers started winning.  They won enough that hiring Vogel as the permanent coach became the obvious call.  Rumors surfaced that hiring Vogel was owner Herb Simon’s call.  Bird and Vogel have always gotten along, but there has always been a sense that Bird’s hand was forced in the hire.

9 – The Knicks throw around money in a way Simon never will.  If you want to get paid crazy money in the NBA, there is no better source for that cash than James Dolan, the owner of the New York Knicks.  After many years of being underpaid, Vogel needs to make some real jack for coaching the team he enjoyed as a kid growing up in south Jersey.

8 – Larry used the “P” word Monday night.  One of the many bits of wisdom Bird shared Monday night with Gregg Doyel was, “You can’t go very far in the playoffs if you don’t score. When I tell people this, it’s not because I think I know it all — it’s because I experienced it as a player.”  That quote harkened back to a quote from Roy Hibbert about looking forward to playing for a coach who “actually played” the game.  Vogel is capable of a lot of very good things as a coach, but he will never be a coach who played in the NBA.  Hibbert sounded petulant and peevish throwing stones at a coach who led him to two all-star seasons.  Bird sounded like a dissatisfied manager.

7 – Being saved by an owner ensures disharmony.  If Simon intercedes on Vogel’s behalf and rescues him from the employment guillotine, he will ensure misery for everyone in the Pacers organization.  As it stands now, there is a robust Bird vs. Vogel debate between fans and media.  Another year of this with everyone secure in the knowledge Simon rode to Vogel’s rescue will derail whatever positive momentum the Pacers built by returning to the playoffs – and then some.

6 – Tom Crean.  According to reports, Vogel earns $2-million per year as the coach of the Pacers while Crean makes an additional $1M+ to lead teenage college students.  Nuff said.

5 – Stock unlikely to grow here.  Will staying longer with the Pacers enhance Vogel’s value to other teams looking for a coach?  Not likely.  Showing he can hold the competitive attention of a roster for five full seasons was the final threshold to cross minus winning a championship, and Vogel did it.  Getting to the Eastern Conference Finals twice before being eliminated by LeBron’s Miami Heat was an accomplishment that will make him coveted, but nearly making the playoffs with Paul George on the shelf was stupendous.

4 – Roster has plateaued.  I guess it’s possible Paul George can marginally improve moving forward, but he was crazy good in the series against the Raptors.  Myles Turner will get better, but the rest of the roster is as good as it will be.  There might be a free agent at the level of Monte Ellis that drops in, but there is little chance a serious difference maker will choose to play in Indy.  Solomon Hill is a goner, and the Pacers will choose 20th in the NBA Draft.  The chances of an improved roster seem slight.

2 – Scott Brooks and Tom Thibodeau.  Those two coaches were both fired after last season.  They enjoyed a year off before entertaining their choice of positions this offseason with extreme raises.  Thibs will be paid somewhere between $8-$10 million and Brooks will make $7 million.  Why would Vogel take a marginal raise to stick around Indy when his resume’ compares quite favorably to Thibs and Brooks.

1 – Larry clearly doesn’t want him back.  Two things we can surmise from Bird’s quotes to Gregg Doyel Monday night – Bird does not need Pacers owner Herb Simon’s permission to retain Vogel, and Bird continues to pine for a coach who can get the offense to be as productive as he would like.  That will bring continued acrimony.  Either Bird or Vogel has to go, and it would appear Bird is pretty well dug in.