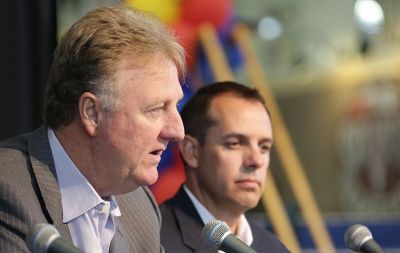 Larry Bird and Frank Vogel were always an odd couple, but the quirky combo worked – for awhile.

There is no doubt after reading the quotes from Pacers president Larry Bird in today’s Indianapolis Statr that he wants to replace coach Frank Vogel.

The headline in the Star says Bird is undecided on Vogel’s future, but that sure wasn’t my take.  Here are the quotes gathered by Gregg Doyel:

Even the most optimistic Vogel supporter has to admit that Bird is going to ask for Simon’s blessing to fire Vogel.  If Bird wanted Vogel here, he would make that very clear as he did two years ago when ESPN’s Marc Stein cited unnamed sources in reporting that Vogel was coaching for his job.

Here are the top 10 things that suck about knowing you are going to be fired before it actually happens:

10 – Knowing your family will be forced to move.  Unless Vogel wants to be a high school coach, the next step in his career as a basketball coach will be in another city as Butler is the only other job paying serious jack.  Kids get dug in, and uprooting them can cause some issues down the road.  Knowing that your failure caused that disruption is tough to process without accepting some longterm guilt.

9 – Knowing that he would likely still be coaching if another shot had fallen.  Solomon Hill released a game-tying three-pointer a millisecond after the clock expired in game five.  An offensive foul call on Paul George in game seven could easily have been a block that resulted in an and-one.  If the dog hadn’t stopped to crap, he would have caught the rabbit.  If, if, if.  Lots of ifs, and if one had panned out, Vogel would be prepping his team for a series against the Miami Heat instead of the phone to ring with a request for a meeting at which he will likely be fired.

8 – Hearing rumors of replacements before being canned.  It would be out of character for the Pacers to be so callous as to publicly speak with or about candidates while Vogel is still the coach, but you can bet friends of Vogel’s are calling with tidbits of news about Bird talking to this guy or that guy.  To be informed of the parade rolling past without you a part of it is very difficult.

7 – Denying the small chance that you will survive.  There is a chance that Simon saves Vogel, but after reading Larry’s words in Doyel’s column, Vogel is certain than he is unwanted by the team president.  If Vogel isn’t fired, the environment at Bankers Life Fieldhouse will be toxic, and the firing will come regardless.  Hoping for survival is part of our DNA, but the knowledge that this thing will unravel regardless makes that hope hollow.

6 – Recognizing that your professional family is really nothing more than a group of business associates.  Packing a box makes crystal clear the true relationship that exists for employees in any business.  The only person with a permanent office is the owner.  Everyone else is replaceable no matter the level of success.  No one is ever more than a single failure to meet expectations away from packing a box and being separated by those with whom you spend more waking hours than anyone.

5 – Knowing that you can help your staff/roster in a way that a new manager/coach can’t or won’t.  There are always employees or players that a coach or manager understands at a different level than the new leader can.  Putting people in a position to succeed is what coaches do best, and when they are asked to leave, there is always collateral fallout.  The guilt over not succeeding well enough to continue to provide an environment where they can thrive is a bitter pill.

4 – Taking the condolence texts and calls.  it’s one thing for friends and co-workers to offer their sympathy for your career reversal once you are fired, but to smile through it before actually getting cut loose is excruciating.  You feel compelled to express hope while acknowledging good wishes.  Frank is being peppered this morning with well-meaning expressions of sympathy.  Every time the phone buzzes, it’s another nice person saying exactly what you don’t want to admit is the truth in a very nice way.

3 – Telling your spouse and kids.  “I’m probably getting fired,” is tough to make come out of your mouth – at least it was for me.  it’s easier for Vogel, who has made a lot of money, and can sit on his ass for years if he chooses without losing his home.  Still, admitting failure after achieving your dream is a complex concept to embrace, and even tougher to communicate to those who trusted it could one day come true.

2 – Pretending it’s not inevitable.  Everyday you have a job, you owe it to your employer to put out an honest day’s work.  Focusing on the task at hand while knowing the news could break at any time is not easy.  Focusing through the doubt-induced fog well enough to get anything meaningful done is a great challenge.  Forgetting that being fired can happen at any moment is a massive weight to carry through a work day.

1 – Waiting for the call for the meeting.  The phone rings, Vogel’s heart sinks as checks the caller ID.  When it isn’t Bird, he takes a deep breath and tries to compose himself.  He knows the call from Bird is coming, but he doesn’t know when.  The best part of the process comes immediately after the call or meeting communicating your firing.  Putting together the plan to attack what’s next is almost as fun as the waiting is excruciating.

Vogel is going to be fine, as Bird suggested to Doyel, but that doesn’t make the waiting any easier.