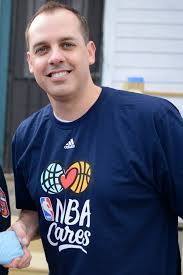 Frank Vogel is a nice guy and outstanding coach who should stay with the Pacers for the foreseeable future.

Last night, the Indiana Pacers season came to an end, and with it the curtain may be ready to fall on the longest coaching stint in franchise history.

Frank Vogel has been the coach of the Indiana Pacers more than 100 games longer than anyone in the team’s NBA history, and he has the second best winning percentage (behind only his boss, Larry Bird).

Yahoo’s Adrian Wojnarowski tweeted this last night to get the tongues wagging about Vogel’s future with the Pacers, “Sources: Indiana coach Frank Vogel’s contract expires at season’s end and so far there’s been no discussion of a contract extension.”

Arguments can be made that while Vogel was exactly the patient voice needed to follow the stern Jim O’Brien, it’s time for another leader to get the most out of Bird’s veteran roster, but those arguments will not be made by me.

I’m a believer in Vogel’s far-sighted methods of extracting the best his players have to offer.  Here are 10 reasons to keep Frank for the foreseeable future:

10 – While good is the enemy of great, it’s also the enemy of crappy.  Everybody wants to win a championship, and for every story of Phil Jackson replacing Doug Collins and Steve Kerr taking over for Mark Jackson, that are instances were a terrible coach was hired to replace a pretty good one.  Bird knows Vogel is capable of taking a good roster to a good result, and that isn’t chopped liver.

9 – Vogel is a likable guy unimpressed with himself.  Most head coaches are delusional self-important creeps.  They believe themselves to be the kings of all they survey – or at least their roster of 15 players.  Vogel is a nice guy who understands that it down’t matter who gets the credit as long as the team performs to its potential.  Basketball needs more coaches like Vogel – not less.

8 – Vogel came within an eyelash of coaching Lance Stephenson to an all-star spot.  Lance left, and basketball got murky for the mercurial Stephenson.  His decision to roll out of Indy in favor of a path that has included stops in Charlotte, Los Angeles, and Memphis in two seasons is not unlike the “grass might just be greener” philosophy that might cost Vogel his gig.  Vogel got the most out of a young man capable of imploding at any moment.  Stephenson wasn’t “Born Ready”, he was made ready – by Vogel.

7 – Vogel got two all-star seasons out of Roy Hibbert.  If I’m Vogel, this goes right at the top of my resume’.  Despite playing only 48 minutes less for the woeful Lakers this season (the only start he missed was the lone return to Indy), Hibbert scored 321 fewer points than he did during his final and mediocre campaign with the Pacers.  Vogel was the baby giraffe whisperer.

6 – Nobody quits on the Pacers.  Barely given a chance to win the series against the Toronto Raptors, the Pacers kept grinding and grinding as they extended play to a seventh game.  Down 16 points midway through the fourth quarter, the Pacers continued to battle.  A coach that has lost the ear of his team would have been exposed during this series.

5 – The NBA is a player’s league.  The best a coach can do is inspire work and a semblance of accountability in an NBA where guaranteed contracts limit the realm of potential consequence for noncompliance or malaise.  Vogel has always been a coach that cajoled and led rather than screamed and prodded.  Going to the whip too often slows a horse.  Vogel rarely goes to the whip.

4 – Back-to-back Eastern Conference Finals appearances were impressive.  Did anyone believe the Pacers could beat LeBron James and the Miami Heat in back-to-back ECFs?  Not many, but the Pacers came pretty damn close.  To earn a spot in the NBA’s final four with personalities and talents as diverse as the Pacers had in 2013 and 2014 was astounding.  Vogel had a lot to do with the success of those teams.

3 – Paul George continues to improve and mature.  Why mess with Paul George’s evolution into a first team All-NBA player if you don’t have to.  If the very best thing Vogel has done is not screw up George, that’s a reasonably good legacy.  If keeping Vogel means that George will continue to work hard and develop, that’s a pretty solid reasons for a contract extension.

2 – Pacers always meet expectations.  Sure, the 1-7 record in overtime games this season left a lot of fans wondering what might have been, but at the beginning of this past season, the consensus was 45 wins and a first round bow out in the playoffs.  Done.  Last year, without George, there was very little chance the team would make the playoffs, but came within a win at Memphis from getting there.  The previous two years – trips to the ECF represented the best possible outcome.

1 – Trend is pointing up.  With Myles Turner developing into a future all-star, and a roster in the midst of being reconfigured for a quicker paced brand of basketball, the Pacers are ready to take a step or two forward.  If you want to roll the dice on a new coach to accelerate that development, go ahead, but there is potential for a long fall too.  Vogel is the devil Bird knows, and the Pacers could do (and have done) much worse in hiring a coach.