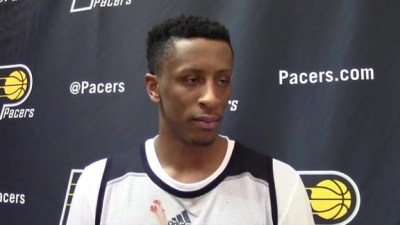 Troy Williams at his Pacers workout was so close to the NBA, he could taste it. That doesn’t make it the right choice.

NBA dreams are so close but so far away for two college basketball players in Indiana.

Caleb Swanigan and Troy Williams are vastly different basketball players, but both should reach the same conclusion – that they are not ready to play in the NBA.  And they need to reach that conclusion at some point today or tomorrow, or they will be committed to remaining eligible for the NBA Draft and declining their remaining collegiate eligibility.

That would cause both to say a permanent adios to their respective campuses in West Lafayette and Bloomington.

For their entire lives, Swanigan and Williams have dreamed of playing on the biggest stage for the most cash, but sometimes a great life full of dreams fulfilled requires patience.

Timing is everything for all but the elite athletes for whom early entry to the NBA is a birthright due to freaky maturity and athleticism.  Swanigan and Williams need to take a deep breath, listen to the power brokers in professional basketball, and dedicate themselves to improving their skill sets before pushing their chips into the middle of the table.

Here are the 10 reasons for Swanigan and Williams to return for another college season.

10 – Money isn’t everything.  When my wife and I were young parents living paycheck to paycheck in Chicago, our son bathed in an inflatable pool we put in our apartment’s tiny shower stall.  We didn’t look at it as though we couldn’t afford an apartment with a bathtub – we saw it as having a son lucky enough to play in a pool everyday.  Embracing poverty is silly, but t’s smart to understand that having a thick stack of cash has little to do with happiness.

9 – Swanigan and Williams rankings are not in the draft window.  The NBA draft is two rounds, which means 60 young men will hear their names called in a month as teams choose assets that hopefully make them more competitive.  Both Swanigan and Williams hover between 80-100 on boards listing players currently eligible for the draft.  Is being drafted by the NBDL worth forfeiting another year in college among friends playing for a title – or two?

8 – College isn’t all bad.  There is a reason that graduates relentlessly return to their alma maters after earning their degrees.  Contentment is a sweet feeling that is difficult to recapture after entering post-grad adulthood.  Caleb and Troy will never feel any more special than during their time at Purdue and Indiana.  Leaving that for a short-term future of virtual anonymity cavorting in empty NBDL arenas is simply imprudent.

7 – Betting on a rogue GM is risky business.  It’s often said that all it takes is one crazy general manager to make a mediocre player wealthy.  That’s as unsure a way to pursue a dream of riches as playing Powerball.  Sure, one GM might defy the odds and select either Swanigan or Williams, but both are better off trying to earn the trust of one of the smart GMs in the NBA by honing their skills before betting on themselves.

6 – The NBA isn’t going anywhere.  Because the rosters are so limited, professional basketball continues to evolve into the most lucrative pastime in America.  Taking a deep breath and committing to improving within the necessary margins while in college would serve both Swanigan and Williams well.  In the end, both could make more money by waiting another year before rushing toward that mirage they believe to be their dream.

5 – Purdue and Indiana have a chance to be very good.  If both Swanigan and Williams return to their programs, both the Boilermakers and Hoosiers would be projected as potential favorites for a Big Ten championship and put themselves in a position to contend for a national championship.  Money is nice, I won’t lie, but life is made up of experiences.  The best investment of money is in experiences.  How much is it worth to give yourself a chance to experience something as special as a chance to play in a Final Four?

4 – Warts in games not too tough to fix.  Swanigan is an indifferent perimeter defender and okay shooter.  Williams gets lost defensively and needs to shoot it better from deep while taking better care of the ball.  Both have NBA bodies and athleticism.  The question for each is what environment is most likely to bring about the improvement necessary to reach the NBA?  Is it in college, the NBDL, or Europe?  Both Purdue and Indiana have shown an ability to sand off the rough spots and build NBA measurables.

3 – Entering the NBA as a first rounder much better than being undrafted.  Williams is a tough putt to become coveted at the level where he might command a first round investment, so this is more a Swanigan entry.  If Swangan can develop an adroit touch from midrange as well as gain an understanding of defensive principles away from the block, he has a chance to develop into a first rounder by next year.

2 – Sooner is not always better.  There are a million examples of people who reach for their dreams and are granted them, but too soon.  People mature at different rates, and while talent is easily seen in both these players, their behavior shows a lack of readiness to answer the very serious and adult challenges of entering a world where people say yes to your every whim.  Metta World Peace said some very interesting things last week about how in his youth (20s) he was unable to listen to adults trying to show him the right path.  Finding your personal path to success prior to attempting to trudge the professional path can be very wise.

1 – What’s the hurry, Murray?  Life is long.  Being a Boilermaker or Hoosier is a pretty cool experience.  Why rush toward tomorrow without enjoying today?  Life is too short to not stop once in a while to smell the roses – or the co-eds.  There is nothing wrong with enjoying the company of peers playing for the joy of the game rather than sharing a locker room with mini-CEOs more concerned with brand building than winning or their love of the game.

There is nothing wrong with trying to earn a roster spot in the NBA, but there is more to life than cash, and sprinting toward riches is generally not rewarded in the measure young basketball players hope.  Take your time, breath, assess, and enjoy where you are before committing to what is next.