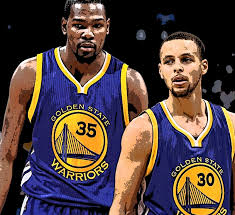 Kevin Durant and Steph Curry as teammates raises expectations to a championship and 75 regular season wins. Inviting that into your life is anything but weak.

Kevin Durant announced today on the Players Tribune that he is joining the Golden State Warriors to form what many will say is the greatest accumulation of talent in NBA history.

What is beyond argument is that Durant has made a decision that is best for him.  That’s because we can’t swim around in his head to learn which boxes needed to be checked in order to make it.

It’s simple and hyperbolic for ESPN’s Stephen A. Smith (imagine that – ‘simple’ and ‘Stephen A. Smith’ in the same sentence!) to yell about Durant making “the weakest move I’ve ever seen” to join the team that beat him a month ago in the Western Conference Finals after Oklahoma City led the series 3-1.

Carping about Durant jumping ship for a chance to win because he felt the Thunder couldn’t do it is itself weak and silly.  As much as Smith believes he invented the concept of insight, we in the media operate in a veritable vacuum of information.  Stephen guesses with passion.  That’s his job.

Let’s look at this from another perspective.  Durant has not only carried a team for eight years – with a nod to Russell Westbrook – but a city as well.  A desire for a new challenge, one where he is not the absolute nexus of team success and civic pride is not evidence of weakness.

Durant understands his decision will have a horrible effect on his adopted hometown, and his status as a statue guy for the Thunder has been abdicated.  That’s not an easy choice.

Hopping a plane for the unfamiliar is never easy because it can provide a rocky landing.  The expectations for Warrior will leap toward the ridiculous.  They won 73 games last season, so Durant on the floor in place of Harrison Barnes should allow them the win, what, 75-77 games?

And if they don’t, what then?

Durant could have remained a hero and hall of famer forever in Oklahoma City, He could have worked tirelessly, continued to average in the upper 20s, and been seen as one of the best five players of his generation.

Instead, he is pushing his chips into the middle of the table.  If the Warriors win 66 games and lose in the NBA Finals or any step of the playoffs prior, Durant will be seen as a loser.  Putting yourself in the jackpot scenario is not a weak move.

Durant has much more to lose than gain by signing with the Warriors because now he becomes a “supposed to win” player instead of a “wouldn’t it be nice if he won” player.

This decision was about a man deciding where he wants to live and work.  As a public figure, he can be criticized and mocked, but it isn’t a just or reasonable response.

The tough part of saying yes to a suitor is the de facto negative response to all the others.  It would have been a lovely moment for Durant and the people of Oklahoma City if he had decided to agree to return.  And how much fun would it have been to be the next big thing in Boston?  Playing with the Clippers in Los Angeles would have opened next chapter doors for Durant.  Saying no to all those options required a man much tougher than Smith gives him credit for being.

And congratulations to Durant for doing it quietly without and pomp, circumstance, or Jim Gray.

4 thoughts on “Kevin Durant to Warriors is a strong move by a strong man despite Stephen A. Smith”