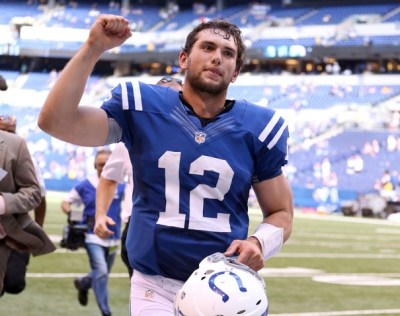 This is how Andrew Luck hopes to run off the field for the final time in 2016.

Training camp begins in two weeks at Anderson University and the Pacers free agent frenzy has run it’s course, so this is the time Indianapolis nimbly shifts gears into talking about the pivotal 2016 season that lies ahead.

It doesn’t take long to pivot to the NFL once the NBA Finals end in towns without a major league baseball team, and Indy certainly is ready to wonder about what will be a fascinating 2016 season.

The first three years of the Ryan Grigson/Chuck Pagano Era were incredibly successful with the Colts advancing one spot further in the playoffs each year.  Last season featured a correction toward the mean as the three year string of 11-5 seasons was ended abruptly by an ugly 8-8 in the NFL’s worst division.

No one, including the Colts themselves, knows whether that regression was caused by the injuries to quarterback Andrew Luck, or if the rest of the roster was exposed as mediocre.

Free agent signings in 2015 like Andre Johnson, Trent Cole, and Todd Herremans were busts, and their first two picks in the 2015 draft were physically compromised by injuries, so it was not a good year for the Colts roster or front office.

2016 can break one of two ways – an improved and healthy team returns to form and wins the AFC South, or the slide is proven to be endemic of a culture that cannot be rescued by the excellence of the NFL’s best young quarterback.

Here are the top 10 areas that will prove the Colts championship worthy or in need of a rebuild:

10 – Can Mike Adams hold up or can young safeties step up?  Adams is 35, but has played the best football of his life during his 30s.  He’s a legit threat to defy father time for another season. The candidates to replace Dwight Lowery at the other safety are young.  Clayton Geathers showed promise in his rookie season, and rookie T.J. Green is big and fast but was not ranked by experts nearly as high as the Colts drafted him.  That’s okay as the experts who spend seven hours a day during the draft yelping about the idiocy of a pick are on TV instead of in the draft room for one of the 32 franchises.  Green looks like a special teamer, while Geathers is a safety. We’ll see if either are ready.

9 – Is Frank Gore a classic or just old?  A 1957 Ford Thunderbird is a great car that evokes a fun and simple time.  A 1967 Buick LeSabre is a charmless rust bucket.  Age in running back is similar to that of cars.  It works for some, and not for others.  Running backs – even great ones – have a very tough time continuing to be productive into their mid-30s, and that is where Gore is at the age of 33.  In the long history of the NFL, only Emmitt Smith and Marcus Allen have eclipsed the 900 yard mark for rushing in a season after turning 33.  Gore is a freak, but if he runs for 1,000 yards this season, he will be the first 33-year old  ever to cross that threshold at his age.

8 – Will Ted Monachino’s defense really be aggressive?  The new defensive coordinator of the Colts came into his first press conference with guns blazing, talking a very good game about how the Colts defense would be aggressive.  That’s par for the course, as no defensive coordinator ever tells the media they will lead a passive defense.  Whether the Colts can field a fan-friendly smash mouth defense will depend upon the level of speed his players display, not the aggressive schemes employed by Monachino.

7 – Can inside linebackers play?  Colts ILB stalwarts Jerrell Freeman signed with Chicago and D’Qwell Jackson will be 33 in September.  Jackson showed no erosion last season, in large part because he was never the fastest guy at his spot anyway, so maybe the Colts can squeeze one more year of productivity out of this very professional football player.  Sio Moore and Nate Irving are vying for the slot next to Jackson.  Antonio Morrison is an intriguing rookie out of Florida.  Will any enhance the Colts defense, or just be flawed placeholders?

6 – Joe Philbin’s influence on the offensive line.  The Philbin hire as o-line coach this offseason was heralded as a coup for the Colts, but the truth is that he spent exactly one year leading offensive lineman as an NFL assistant, and that was 10 years ago with the Packers.  Since then, he has been an offensive coordinator for the Pack and head coach for the Dolphins.  Does any of that necessarily mean that Philbin is the next Howard Mudd?  No, but it doesn’t mean he isn’t the answer either.  Philbin’s effect on the o-line will be a wait and see proposition.

5 – Art Jones health.  If Jones plays at the level to which he is compensated, the Colts defense will take a quantum leap forward, but football players rarely get healthier as they get older.  In two seasons with the Colts, Jones has played in 12 games, including the postseason.  When the Colts signed Jones as a free agent for $33 million over five years, they expected an anchor for the defensive line.  Through no fault of their’s or his, Jones has been unable to contribute as an anchor, sail, or cook on the SS Colts.

4 – 2016 draft class contributions.  Ryan Grigson was seen by those in the NFL as an “off the radar” hire when owner Jim Irsay tabbed him to replace Bill Polian as the chief architect of the Colts roster.  He got off to a great start by selecting Andrew Luck #1 overall in the 2012 draft, and then backed it up by snagging tight ends Coby Fleener in the second and and Dwayne Allen with the first pick of the third.  Trading up to get T.Y. Hilton later in the third round was a revelation.  Since then, not much has gone right for Grigson.  After grabbing Bjoern Werner in the first round in 2013 and dealing the 2014 first rounder to Cleveland for Trent Richardson, among other dubious moves, Grigson seems to have assembled an intriguing 2016 draft class.  Ryan Kelly appears to be a no-brainer solid center.  Several of the other rookies need to come through to save what is left of Grigson’s reputation as an evaluator.  2012 is starting to seem like a very long time ago when Grigson’s body of work is evaluated.  Just because a high school junior aced an exam in the 8th grade, he doesn’t earn a spot on the honor roll.  Grigson needs the 2016 class to bring acclaim not blame back to the Colts front office.

3 – Pass rush effectiveness.  Robert Mathis is 35 and Trent Cole is 33.  Whatever is left in their respective tanks, the Colts need it if they are going to return to the top of the AFC South.  The two most important components of winning football teams are keeping your quarterback clean and dirtying up the opposing QB.  If Mathis and Cole, with 26 years of combined experience in the NFL, get hurt or can’t get to the QB, the Colts will rely on Erik Walden, Earl Okine, and three rookies to get the job done.

2 – Offensive line knitting.  The Colts return a veteran group of guards and tackles who have been looking for a center since the departure of Jeff Saturday.  Grigson drafted center Ryan Kelly to solve that problem, and to this point he seems like a great addition.  Kelly carries himself with the confidence of an adult in the locker room.  If he can read defenses, call out assignments, and block effectively, the Colts o-line will take a step toward competence..

1 – Andrew Luck’s health.  That offensive line needs to play well every down this season or the franchise (Luck) might fall for a second straight year.  There may be no more important player to his team in the NFL as Luck is for the Colts, and another season-ending injury would be catastrophic.  Without Luck, this may be a very mediocre team.