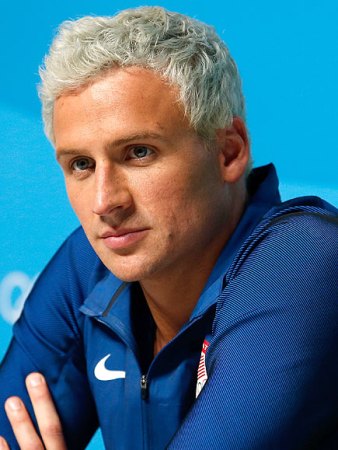 Ryan Lochte looks like the kind of guy who would pee on you while you slept and lie about it in the morning – and evidently he is!

Assuming the Ryan Lochte story unravels as expected and he’s exposed as a liar, he will become a punchline forever – an ugly American who treated another country as his toilet and claimed sanctuary as a victim of an armed robbery before fleeing Brazil.

The sad part of this sometimes hilarious story is that right now no one in the United States is talking about Usain Bolt, the American sweep of the 100M hurdles, or the near perfection of Simone Biles.  They are all too busy discussing Lochte and his gang of public urinators and vandals to bother with the once in a lifetime accomplishments of athletes who get the spotlight once every four years – or in some cases once in a lifetime.

It’s obvious to a seven year-old that Lochte is a big time moron, and that his parents never held him accountable for telling a tall tale, but here is a list of the top 10 ways (of at least 30) he crossed the border between irresponsible drunken fun guy and humiliated worldwide coward:

10 – International idiocy cannot be easily controlled.  Americans are all well acquainted with how our legal system can either work for or against us when we are at our worst.  In another country, the rules change, particularly when the eyes of the world are upon that place.  Outwitting what may appear on the outside to be a bunch of backwater rubes is often not as easy as it looks.  If you doubt me, cross the Ohio River into Kentucky and go nuts.

9 – Understand video is everywhere.  Not only are there cameras installed by well-meaning governments on many street corners recording our every movement, anyone with a smart phone has a remote TV studio a single button push away capable of sharing your exploits with a live worldwide audience.  Today, lies can be disputed with something far more compelling than just another eyewitness account.

8 – Keep your lie out of the papers.  If you are going to lie about something, stay away from cameras and microphones.  Keep your deceit to a very tight radius.  Going on the Today Show with a wild, self-aggrandizing tale of how you refused to get down so a pistolero put his gun to your forehead is way too vivid a lie not to stick.  We wanted to know more, and a lie should satisfy curiosity, not create more of it.

7 – Should have learned prior to turning 30 that acting like a tool has a price.  If you are going to enter the realm of international late-night stooge, you should do it during a period of your life when people can explain it away with a simple, “he’s a kid who doesn’t know any better.”  After turning 30, life should have sorted itself out enough that what is happening to Lochte doesn’t happen at all.

6 – Can’t both look like a douche and act like an entitled douche.  I have a soft spot in my heart (and on my scalp) for boobs who bleach their hair for a silly reason, so I can embrace that impulse without wincing, but then to also get bombed and break a gas station men’s room door and piss all over the place is just too much.  That combination casts a guy into the seventh circle of douche-dom.

5 – Left boys behind to do the time.  Lochte was back in the good old USA before the whiz hit the fan.  Two of his cohorts were on the plane before being detained for questioning.  To be the loudmouth and the first man over the wall is not a good look.  A gang of drunks – especially those from a swim team – should sink or swim together.

4 – Always tell the truth.  Especially when it’s embarrassing, tell the truth.  The only time to avoid the truth completely is when the consequence is a ruined life – and I mean scorched earth ruination.  To be a self-important twit is one thing.  To not own up to it in a circumstance like this is just stupid.  Lying as a means of self-entertainment is asking for exactly the kind of notoriety Lochte has gotten.

3 – Don’t lie about guns.  If you are going to lie to cover up some silly nonsense like peeing in public, don’t bring guns into the discussion.  Law enforcement folks, even those in Brazil, get ambitious when gun play is accused – especially by an Olympian from a country that sends tourists to Rio in bulk.

2 – Never pee on what another man owns.  There is only one legit response from a property owner or manager when another man tinkles on what’s his, “Hey, what the hell are you doing?!” From there, it can either go sideways or very sideways.  Generally, bolting is the correct response when the owner starts barking.  Lochte swerved into another tactical response that has made him a national punchline.  Always better to hold it – or hide it.