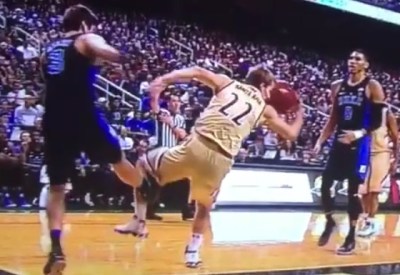 No question Grayson Allen’s trip of an Elon player was asinine and childish, but the media’s immediate judgment might be just as wrong.

Today, I was happy my radio show didn’t start until 3p.

Prior to that, I joined the chorus of those who chewed out Grayson Allen for his petulant boorishness in tripping an opponent as Duke beat Elon last night.

I was as eager to judge the Duke Basketball program for coddling/enabling him for the last year.

Because of a series of texts with someone close to the Duke program, I began to recognize some of Allen’s behavior as being similar to my own when I played soccer in high school.

Anger fueled some of my decision making as an athlete, and it occasionally manifested itself in flashes of Allen-esque physical play.  It was never done with the intent to injure, but it was childish, self-indulgent, and embarrassing.

There were aspects of my life that spiraled out of my control during high school, and that chaos manifested itself in the same level of strange antics that have turned Allen into one of the most derided and reviled figures in the history of college basketball.

Last night, when ESPN shared a replay of Allen’s trip of an Elon University opponent, I tweeted “Grayson Allen is to basketball as @RealSkipBayless is to sports media – a relentless disappointment incapable of defying low expectations.”

As with most tweets that are clever, the thought was way too simple to be accurate.  Rarely is anything purely good or evil, and never is 140 characters sufficient to convey a complex thought.  There is nuance everywhere that forces authors of clever tweets to later admit their ignorance.

Maybe Allen really is a wing nut who has been enabled by authority figures because of his prodigious basketball skill, but I believe it’s more likely that he’s an emotionally troubled kid who has yet to find a way to deal with the anger something else in his life has prompted.

Duke coach Mike Krzyzewski is more likely a mentor in a unique position to lead the young man to a healthier emotional place than a win hungry coach eager to placate a talented kid.

It took me awhile today to reject the clever and seek circumspection that shows a little empathy for the subject of ESPN’s most recent series of 24/7 hot-takes.

If my show had been at 9a, I would have hammered Allen and Krzyzewski for being coddled cretins – an irrational and dangerous pawn and a win-hungry emperor who co-exist solely for the glory of victory.

Glad I had six more hours.

There isn’t any doubt that Allen needs help.  Someone needs to lead him from the darkness of his emotional frailty to the light of trust and reason.

Allen is a human being, not some cartoon character to be mocked, hated, and discarded.  He is flawed, so the media turns on him with all the clever vitriol it can muster.

Maybe the best path is for Krzyzewski to bring down the hammer, admit his methodology of helping Allen has failed, and force the kid to look into a mirror for a good long time.  Maybe it would be best for Allen to step away from basketball and get serious counseling.  Maybe this indefinite suspension will be the tonic that allows Allen to correct his emotional lapses.

Krzyzewski said during his postgame comments last night that he knows Allen “better than anyone.”  What that means is that he knows something we do not, and that something is a big deal – something that if we knew it, we would have a greater understanding of just what the hell is going on in Allen’s mind as he loses it.

We can settle for 140 characters of derisive wit, or why can see Allen as a human being – a son, brother, friend, and teammate.

Maybe empathy comes a little bit easier for me because I have tripped opponents.  I didn’t understand the consequences of bottling up anger and frustration as a teenager, and so I undercut a kid going up for a head ball or popped up during a slide tackle to cause a wing to tumble ass over elbows.

Maybe empathy didn’t make my radio show as hilarious and entertaining as it might have been if I were a callous, clever, and quick-to-judge ass.

If it started a few hours earlier, I would have delivered laughs.

Glad it starts at 3p.

One thought on “Judging Duke’s Grayson Allen’s habitual tripping might be fun, but wrong”