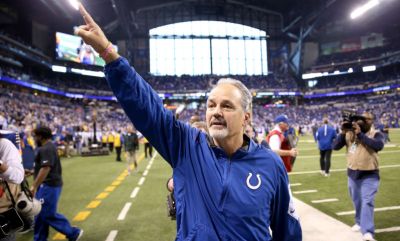 Chuck Pagano might walk off the field at Lucas Oil Stadium for the last time this Sunday. If it is, it will be his first steps toward something new and challenging.

That damnable moment comes for almost everyone.  A meeting is called, a door is closed, and the news is imparted short and sweet, “Today is your last day.”

It’s a very public event when an NFL head coach is told his services are no longer required, and it can also be quite lucrative.  The cash doesn’t help cushion the soul for the initial shock, but it makes the transition to what’s next a little easier.  It also makes the call to the family less stressful.

“Hey honey, I’ve got good news and bad news – the bad news is they let me go.  The good news is that I’m holding a check that is going to pay off our home, pay off our kids’ student loans, pay for a comfortable retirement, and fly us to wherever you want to go – first class – today – right now.  So pack our bags!” the coach says to his wife.

His wife would like to cry for her husband, but the reality is that she is thrilled he’s coming home for more than a four-hour nap.

Then he goes about answering adversity in the same way he has counseled his players.  He won’t allow the negative moment turn him into a negative person.  He wakes up the next day determined to continue to be productive, regardless of whether another team asks him to do it for them.  He calls friends and peers most likely to say he’s not nearly as worthless as he feels.

In a week or two, the self-loathing turns into a desire to see justice done – justice being finding another job so he can issue a beat down that reminds the former employer of why he was hired in the first place.

This is what I surmise happens when an NFL coach is fired.  It’s what happened to me when I was told to pack a box as a middle manager in media, and while there are likely a couple of extra zeroes on the check that assuages the guilt of the bosses of the coach, I’m guessing the emotions and timeline are similar.

Indianapolis Colts coach Chuck Pagano is unsure right at this moment whether he will have endured such a circumstance by the time next Tuesday rolls around.

My advice to Pagano is to relax and enjoy the ride.  While being told he failed at his dream job will be exceptionally painful, it will be a test of character at which he will undoubtedly flourish.

In time, he will come to understand that while his vision of holding a Lombardi Trophy as the coach of the Colts has been destroyed – his journey through a life that impacts others so positively will continue.

Pagano may get another job as a head coach, and he may not.  I hope that he does.  It will give him a chance to apply all the lessons learned through his first experience.

While Pagano’s tenure as the coach of the Colts will define him among fans and media, it will not paint an accurate portrait of his value as a man.  Only a person’s love for his family and fellow man can do that.

In the end, being fired is likely the best thing that can happen to (or for) Pagano.

He has appeared to survive the pressure of this season rather than thrive in answering the challenges it provided.

Survival is a goal for a prisoner, not a coach.

The time has come for Pagano to be released.