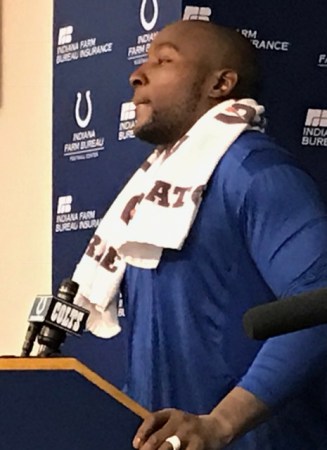 Robert Mathis will retire Sunday as a Colts player, but not as a guy always willing to show up and do the right thing.

Robert Mathis is a borderline hall of famer as a football player, and he will play his final game as an Indianapolis Colt this Sunday at Lucas Oil Stadium.

Robert Mathis is a definitive hall of famer as a force for good in Indianapolis – a man who has used his position as a professional football player to raise a ton of money and awareness for many charities in central Indiana.

One-hundred-twenty-two sacks and 52 forced fumbles don’t define Mathis’ legacy as a Colt or person, but they have meant a hell of a lot to the only team for whom he has ever played.

When Mathis retires, he will become the longest tenured Colt to play only for the team.  Reggie Wayne also played 14 seasons, and never played a down for anyone else, but he did sign with the Patriots the season after he and the Colts parted ways (if it wasn’t the Patriots, I might be willing to overlook his temporary team blindness).

The first time I met Mathis, he was one of many Colts supporting teammate Gary Brackett’s Impact Foundation at an event at the Omni Hotel downtown.  This was before Mathis made a name for himself as an all-time great – or even an all-time good.

He was there supporting his teammate, and Mathis doesn’t look like your typical behemoth defensive lineman at 5’11”.  Without knowing exactly what he looked like, you would have thought he was a well-dressed donor.

Alone in a corner, he waited for someone to talk to him with the same enthusiasm they had for Brackett, Dallas Clark, Dwight Freeney, and even offensive linemen like Ryan Diem and Tarik Glenn.  I got a little anxious as he stood alone, so I introduced myself, and we talked for a bit.

He said very little.  Mathis is a quiet man, not a grandstander or loudmouth.  It was sweet to see such a shy guy support his teammate despite his obvious social discomfort.

That day and many others, Mathis showed that he had learned an important life lesson – the need to simply show up.  Ninety-percent of life, they say, is simply showing up.  For 14 years with the Colts, Mathis has done exactly that – on the field and in the community.

Hopefully, he chooses to continue to call Indianapolis home, so we only miss him as a player and not a Hoosier.