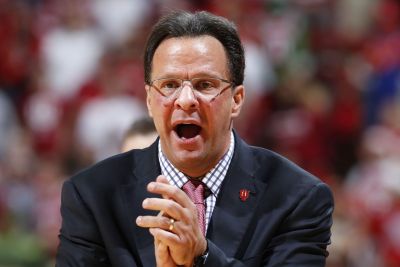 Tom Crean didn’t show for his own firing as basketball coach at Indiana University.

Tom Crean could have won his last game as basketball coach at Indiana University.

He chose to not play.

In the most interesting and revealing paragraph in Pete Thamel’s post on si.com featuring the first comments from Tom Cream about his firing as basketball coach at Indiana University, Thamel reported what he was told by Crean,

The next morning, Crean got a text message from athletic director Fred Glass to meet with him, which Crean inferred was to receive news of his dismissal. He declined. “At this point, I knew what was coming,” he said, “and wasn’t going to do that.”

Being fired sucks, but it’s part of life – especially in coaching.  Coaches can do a superb job and still get gassed if the results don’t reflect the level of work.  If fans aren’t engaged by the product, great coaching can be irrationally blamed.  That’s not what happened at Indiana, but Crean certainly could choose to look at his tenure as coach as a success while still acknowledging his time at IU needed to end.

He could have shown up for the meeting, looked athletic director Fred Glass in the eye, dared him to pull the trigger, and accepted the news like a man.  He then could have taken the high road – and the logical road – by extending his hand, thanking Glass for the opportunity (and $28-million).

Being fired reveals character, and Crean showed his.

Crean’s refusal to attend his own firing also cements his assessment expressed to Thamel throughout the post that a lack of alignment existed between the athletic administration and the basketball program he ran.  Public opinion about the cause of the lack of alignment will and should be colored by his decision to avoid the meeting.

The most surprising part of this admission by Crean is that he made it at all.  As Indiana’s coach, Crean was handsomely paid to read a situation and strategize to control it.  Sharing his decision to not attend his own professional reversal of fortune showed a tone deafness that reveals him to be a checkers player instead of a chess master.

What are we to conclude about Crean other than he avoided an unpleasant moment, rather than try to win it?  He also showed that while he was employed to shepherd adolescents into manhood, he failed to show much himself when faced with adversity.

That lone paragraph from Pete Thamel is all Indiana fans who questioned the decision to fire Crean need to reassess and see this as a right step.