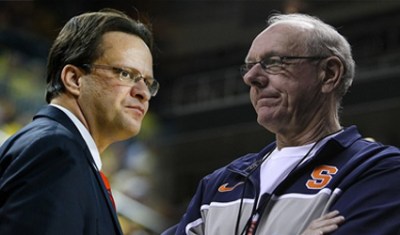 Lydon was selected 24th in last week’s NBA Draft, and Crean questioned the wisdom of the pick during The Vertical’s draft night webcast, “The whole strength is supposed to be the shooting, things like. … I think he plays hard, I think he tries hard, I don’t think he’s soft. But I don’t think the shot is there. I don’t think the mobility. Guys like him, who are they going to guard?”

Boeheim didn’t like that, and he put Crean on blast, “He’s an idiot.  He said he’s not a good shooter. Freshman, sophomore year he shoots 40 percent from 3. That’s pretty good for a young player. I think he had the best shooting statistics at the combine,… It just shows the ignorance and not doing the work, the research, the background check.”

Welcome to media.  Guys on the inside do not like guys on the outside making assumptions based upon incomplete knowledge.  It’s Boeheim’s job to know intimately the skills and weaknesses of 13 players under his charge.  The media needs to know something about everybody.

It’s not hard to see why Boeheim would evaluate Crean’s depth of knowledge regarding Lydon as lacking, but to call him “an idiot” is a personal shot that goes deeper than a simple failing grade over whether Lydon can make it in the NBA.

Maybe it’s not so much a personal shot as a lack of professional respect earned during the three games Boeheim and Crean were on opposite benches.

The following year, Syracuse beat the Hoosiers 69-52 in the Big 10/Acc Challenge.

Maybe this was nothing more than a good natured jab at a former colleague who has turned to the dark side (media), but maybe it was a dismissive utterance that revealed Boeheim’s true contempt for a coach he seems to have owned during the heat of battle.