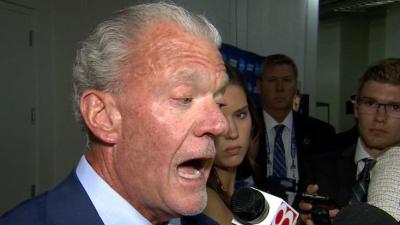 When Jim Irsay speaks, blame for investing in the ideas expressed belongs to listeners

The return of Colts quarterback Andrew Luck has been a shiny tchotchke dangled in front of fans’ noses since the opening of training camp.

It was shattered yesterday as the Colts finally placed Luck on injured reserve, which ends his season.

Colts fans are rightfully miffed that their team is missing the roster’s only difference maker.  That anger requires a target, because that’s the societal requirement for being pissed off these days.

Let’s take a specific look at a variety of potentially blame-worthy candidates to decide whether they truly deserve culpability for the mismanagement of the injury or the Colts response to it:

Jim Irsay – Blaming irsay for saying wacky things is like blaming a cow for mooing.  It’s just what he does.  Irsay blathering about pristine biceps and other Luck related shoulder jargon while investing great optimism in his imminent return was reckless, but that should be expected and dismissed.  We assessed it as relevant, and for that we are to blame.  Living a life as a billionaire removes a significant level of consequence for weirdness and irresponsibility.  We have no such excuse, and should have known better than to listen.

Ryan Grigson – Yes, Grigson was a poor GM, but unless there is a future revelation that Grigson ordered Luck on to the field despite medical advice to the contrary, he is in the clear.  Let’s stop kicking dirt on this buffoon’s grave.  Allow him to rest in peace – or Cleveland.

Chris Ballard – Not even a Colts employee when Luck underwent surgery, Ballard cannot be held accountable for any of the malfeasance regarding the decision for Luck to play hurt or have the labrum repaired.  Where we can question Ballard as a GM is in the decision to roll through camp with Scott Tolzien and Stephen Morris as the only potential starting QBs, and then to cut Morris.  He did not sign a free agent stop gap that might have put the Colts in a better position to finish the season 6-10 instead of 0-16.

Instead, Ballard waited for the right quarterback who could play now and be a very capable backup when Luck returns.  The trade for Jacoby Brissett was the right move – just at an odd time.  Ballard knew his roster stunk and the season was lost without Luck.  In 2020, it is likely fans will view 2017 as momentary pain that yields a very positive result.

Chuck Pagano – His only failure was to not tell the complete truth during his media availabilities.  I mean, what’s Pagano going to do, lay hands on Luck’s shoulder to invite God to expedite the healing process?  Pagano is a dead coach walking – virtually certain to be fired immediately upon the completion of this season – but his handling of the Luck injury is not one of the reasons.  There is a very basic level of distrust between Pagano and the media, and that has not allowed the Colts to communicate about Luck effectively with fans.  Blame him for that, sure.

Andrew Luck – File blaming Luck under damned if you do and damned if you don’t.  When a football player gets hurt, we champion those who grit through pain and potential further injury to return early.  That’s what Luck did, and now people whine about Luck risking his future by not shutting it down immediately and undergoing the labrum surgery from which he currently rehabs.  Do we want tough guys who rub some dirt on it, or pragmatic weenies who choose to not compete by opting for surgery?  In this case Luck showed stones, battled, and is paying the price.  No one should blame him for that.  He should be saluted.

Sometimes, bad things happen because dominoes fall in a direction no one foresees, and so it is with the strange case of Luck’s shoulder.

If your anger toward a terrible Colts team needs a scapegoat, go ahead and yell at someone.  Throw darts at a picture of Pagano.  Create a Haitian voodoo doll in the likeness of Irsay and stick pins in the damn thing if you like.

Whatever gets you through the night is fine by me, but you should also embrace Hanlon’s Razor – “Never attribute to malice that which is adequately explained by stupidity.”