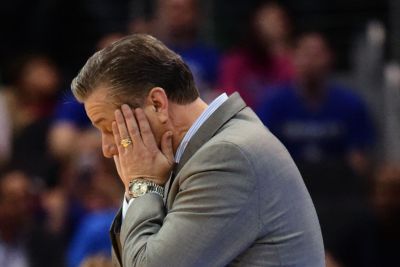 John Calipari left the floor last night without shaking hands. It’s a shame anyone believes the world would be better if he did.

Kentucky coach John Calipari has always been a self-immersed twit and a blight on college basketball, so please don’t misunderstand my thoughts on the stupidity of the postgame handshake ritual as a validation of his decision to blow it off last night.

Kentucky got beat, K-State celebrated, and Calipari left the floor without waiting to shake hands.  Not defending it, not chastising it – I don’t care about whether Calipari shook hands.  That he lost – again – is good enough for me.

The handshake line is an idiotic and worthless gesture executed by athletes and coaches who are doing what they have been told without any empathy, joy, or purpose.

It is done only to try to improve the optics for fans who are easily buffaloed into believing the handshakes convey sportsmanship.  They don’t.

That’s not to say that good sportsmanship is not important.  Understanding there are more important things than winning or losing a silly game shows a mature perspective, but seconds after the end of an emotional game is not the time to ask players and coaches to embrace it.

Not only is it an empty and valueless gesture – it puts competitors next to one another while ill-temper still smolders, and that can lead to fights and other examples of poor behavior.

I’ve seen it at the end of high school soccer and basketball games.  Once in 2004, I saw a full on riot at Arlington High School after an Arlington player swung and connected with a Cathedral player.  Calmer heads eventually prevailed, but not before the Cathedral kid’s dad was rushed to the hospital with a heart issue.

It happens all the time, and the correction is very simple.  Eliminate the tired charade of the handshake line, and replace it with what already happens 20 minutes after games while the visitors wait to get on the bus.

Players from both teams converge in the halls or on the court to say hello and talk for a few minutes.  It’s more meaningful, and it allows players to regroup emotionally before embracing one another.

The only difference is that it’s unseen by the majority of the fans and TV audience that demands players give everything on the court but understand it’s only a game the moment the buzzer sounds.

It’s ridiculous, unfair, and sets the expectation for circumspection so grossly high that it can’t be met.

I won’t defend Calipari, but the event that caused today’s vigorous debate about his behavior should be eliminated.

His pique and petulance last night are very small reasons to end the handshake line farce, but the sooner the better for making that overdue call.

One thought on “Handshake line charade needs to go, but not because of John Calipari’s act last night”