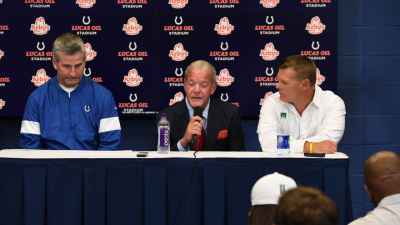 Indiana sports fans will tolerate losing, but not a violation of trust.

Hoosiers do not like being lied to.  We trust easily, but once that trust is broken, good luck winning it back.

The Colts have not been forthcoming with answers about Andrew Luck’s health for as long as there have been questions about it.

History shows Indiana natives are not kind to those who violate them.

The Colts are edging ever closer to the tipping point where Indiana could lose interest in its NFL franchise.  Its handling of the Luck injuries that led to his retirement at age 29 was clumsy at best.  The team’s vague diagnoses of Luck’s maladies and inaccurate prognostications of when he would return have been a major annoyance.

Owner Jim Irsay talking about Luck’s “pristine bicep” still rings in fan’s ears.  The constant references to Luck “making progress” prior to being shut down in 2017 and retirement last Saturday night are recent irritants.

This is nothing new, despite a change in most positions other than ownership.  Back in 2008, I remember being in Terre Haute for training camp, seeing Peyton Manning with my own eyes, and 15-minutes later being told the Colts would not comment on rumors that he was even in Terre Haute.

Saturday night brought the ultimate indignity for fans.  They believed themselves to be the last to know Luck had retired.  They saw him laughing on the field at Lucas Oil Stadium, but also saw Adam Schefter’s tweet that his career was over.  Confusion reigned.  Boos accompanied Luck off the field as he left it for the last time as a rostered player not because he can’t take the pain, but because fans are fed up of the deception.

As with virtually all professional sports franchises, the Colts go out of their way to refer to their fans as “the best in the world”.  Fans are tired of lip service.  They want respect, and if they don’t get it, the adulation to which they have become accustomed might drift away.

It bears mention that general manager Chris Ballard has appeared to be very honest through his two-and-a-half years on the job, but Ballard’s level of honesty needs to be a contagion through the Colts building or there will come a reckoning.

Indianapolis is a city filled with very nice people, but shown a lack of respect, they can turn surly.  Just ask Formula One, NASCAR, and the Indiana Pacers.