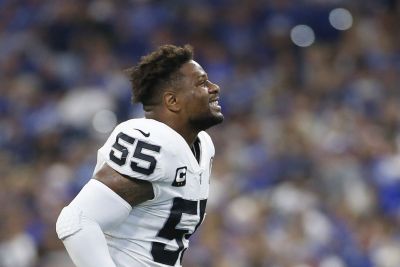 Vontaze Burfict mockingly grins at Colts fans as he leaves the field – likely for the final time.

When Vontaze Burfict lowered his helmet to hit kneeling Colts tight end Jack Doyle in the head, flags flew.  Referees conferred and Burfict was ejected from the game.  This morning it is being reported that NFL commissioner Roger Goodell will suspend Burfict for the rest of the 2019 season.

The NFL has been dragged kicking and screaming into treating players like human beings rather than gladiators to be sacrificed for the entertainment of blood thirsty fans, but Burfict never got the memo.

Burfict will be 30 next season, and he’s no longer good enough to justify the risk of employing him.  Teams aren’t going to sign a mediocre player like Burfict whose indifference to consequences for his short-sighted and malicious play has already resulted in a season-long ban.

And so his career will almost certainly end.  Rightly so.

Doyle was able to get up unaffected by the hit, but others have not been so lucky and more have likely been saved from the kind of head trauma that has affected so many former NFL players.

Football is a violent game.  That’s part of its appeal.  But at some point players need to respect each other a little bit as they ravage one another.  The object of the game is to score points and try to keep opponents from scoring.  It’s not about sending receivers to the hospital or causing loss of brain function later in life.

If basic humanity didn’t teach Burfict that lesson and 13 fines and suspensions didn’t wisen him, he forfeited his right to belong to the fraternity of NFL players.

Finally, the NFL has washed its hands of a sociopath who refused to embrace what the NFL has become and what it should be.