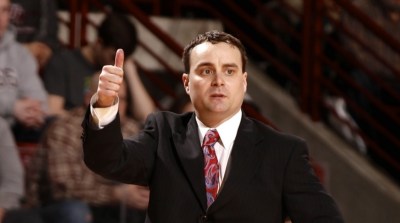 IU fans might not be ready to return Archie Miller’s thumbs up, but the day might be coming.

If you want to start a fight at a sports bar in central Indiana, drop that bomb at a table where someone is wearing red and white.

It’s not that IU fans are split as to whether Miller is doing a great job or a terrible job.  The debate is more nuanced than that.  This is about whether the current state of the program is all there is to look forward to.

With Brad Underwood and Steve Pikiell elevating the level of Big 10 coaching to where they are all damn good, it’s harder than ever to build a successful program in America’s best conference.  And wait for Fred Hoiberg to get things rolling at Nebraska.

Being competent is not enough for a Big 10 program.  Coaches need to be outstanding just to tread water.  Is Miller good enough to help Indiana return to the national prominence fans have missed since the early 1990s – minus unexpected success in 2002?  That’s the question.

Those numbers are in ascension and that’s fine, but fans are concerned that Purdue’s rankings over those same three years with an ever-rotating roster have been #5, #9, and #25.  They are even more perturbed that Michigan State and Michigan are routinely in the top 10 while Indiana struggles to rank inside the top 50.

Indiana’s routine excellence more than a generation ago is not a distant memory for many alums.  Visions of banners being raised and trophies hoisted are so real, fans can almost touch them.  They see each year as the time all will return to normal and the Hoosiers standing among college basketball’s best will resume.  It make the last 18 seasons evaporate like some deranged dream, they believe.

So IU fans obsess over whether Miller is the right coach to lead the Hoosiers back from this coma of mediocrity.  They’ve been forced to sit patiently through wobbly efforts by Mike Davis and Tom Crean.  They cheered and then cringed during two years of on-court success and off-court buffoonery from Kelvin Sampson and his team.  So excuse them for clamoring a heaping helping of win be served to them RIGHT NOW.

Indiana fans are called impatient by those who believe the clock magically restarts every time a new coach is hired.  It doesn’t.  This clock began ticking during the final years of the Bob Knight era as the Hoosiers place as a blue blood began to wither.

Miller has not exactly delivered as a savior, but as we discussed earlier, the progress is undeniable if not satisfying.  Recruiting, especially in Indiana, has been reenergized.  The commitments of previous and soon-to-be Indiana All-Stars like Romeo Langford, Rob Phinisee, Damezi Anderson, Trayce Jackson-Davis, Armaan Franklin, Anthony Leal, Trey Galloway and Khristian Lander have shown Miller to be a man of his word when he promised to establish this state as his recruiting base.

There are other Indiana kids in the pipeline who might pledge IU.  The 2021 class is loaded with talent, and if Miller can net Caleb Furst and Trey Kaufman the Hoosiers might continue their climb past some Big 10 programs fans used to dismiss as trivial.

In the meantime, Indiana still has work to do this season.  Tomorrow’s challenge at Illinois could cement the Hoosiers return to the NCAA Tournament since 2016.  Even with a loss, IU can still score an invite by closing the regular season with home wins next week against Minnesota and Wisconsin.

Demanding calm from a group of fans who have deserved better from administrators, coaches, and players for the last quarter century is unreasonable, but if IU zealots can find a way to appreciate the slow and steady progress from Miller’s IU teams, it just might be rewarded this time.

3 thoughts on “Indiana fans need to start focusing on progress under Archie Miller, rather than focus on each loss”