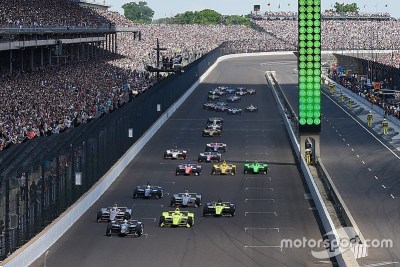 Just because there won’t be craziness at the Indianapolis Motor Speedway this Sunday doesn’t mean you can’t get crazy without it!

Right about now every year, Indy 500 fans in central Indiana are stocking up on food and beverages.  When asked, they refuse to divulge their secret route to the variety of entrances that surround the Indianapolis Motor Speedway.  The most ambitious are trying to figure out how to be included in a police escort to the grounds so they avoid massive traffic jams entirely.

The hallowed yard of bricks that marks the start/finish line will not be crossed 200 times by cars traveling at nearly 240 miles per hour.  They will not be kissed by the winning driver and team.  More than 300,000 fans will not converge upon the aptly named town of Speedway for the Greatest Spectacle in Racing.

The 104th Running of the Indianapolis 500 is not scheduled to be run on the day before Memorial Day for the first time since 1973.  Because of Coronavirus, the race has been postponed to August 23rd, and so Indianapolis will need to figure out just what to do with Memorial Day Weekend without the Carb Day drunkfest and concert, the 500 Festival Parade, Jim Cornelison singing “(Back Home Again in) Indiana”, and the race.

People in the midwest will not be prodded and cajoled by Hoosiers extolling the virtues of this singularly thrilling afternoon of insane speeds in front of the biggest crowd in the history of sports.  This year, those calls, emails, texts, and social media posts will not bewilder those who just don’t get it – the people who have never attended an Indy 500.

Fans will not be making hourly checks on the weather forecast for race day, which is a good thing because right now the chances for storms stand at 40% during the time the 500 would normally be run.  No reason to drive ourselves crazy as we flip from Chuck Lofton to Randy Ollis to Star Derry in the morning and Brian Wilkes, Kevin Gregory, and Angela Buchman at night.

We will wait for one day shy of three months for our opportunity to come together for this utterly unique annual celebration of speed, tradition, and the opposite of social distancing.  Fans hope that by August 23rd this pandemic will have drifted into irrelevance, and six-foot buffers will no longer be required.  That seems a long shot today, but there is always hope.

This Memorial Day weekend, we will remember all the thrills, spills, and long afternoons watching cars, people, and the skies from previous Memorial Day weekend Sundays.  There won’t be any lines of people waiting their turns at the restroom troughs, WIBC Morning Show with predictably dire traffic reports, and TV interviews with drivers in their garages and motor homes.

These are strange days.  Our lives and the traditions we use to mark the seasons are on hold for now.  We are left with our memories and imaginations to keep us entertained as we count the days before Stage 3 of Indiana re-opening becomes Stage 4 and then Stage 5.

Our lives will continue moving forward far less quickly than an Indy Car – even during a pace lap.  But as we miss the Indianapolis 500, we know this too shall pass, hopefully like Josef Newgarden slingshotting around Pippa Mann.

In the meantime, fill a cooler, load up a grill with red meat, invite some friends to your home, and celebrate like hell.  Coronavirus can cause the Indy 500 to be delayed 91 days, but it can’t keep us from enjoying every single day until then.